As soon as he learnt that a runner had collapsed at Sunday's Standard Chartered Marathon Singapore (SCMS) and subsequently died, Adrian Mok made a quick mental note, reminding himself to review the safety protocols for his events.

The managing director of HiVelocity Events, which organises the annual Sundown Marathon among other sports events, said: "After yesterday's incident, I asked myself whether my (safety) plan is enough or is there anything more that could be done for future races. What we can do as organisers is to review the plan."

Mok is not alone. The sudden death of 29-year-old Hong Kong-born Briton John Gibson at the SCMS has once again cast the spotlight on safety in endurance sports events, prompting race organisers here to take another look at their safety protocols.

Jeffrey Foo, managing director of Infinitus Productions, which organises several running events including The Straits Times Run and the Great Eastern Women's Run, feels that his company has a well-oiled safety plan in place, nonetheless, there is room for improvement.

While he assured race-goers that they are always "in the line of sight"of medical personnel along the running route, he acknowledged that perhaps there could be more signs being put up to help runners better identify their exact location. This will allow staff manning the emergency hotline to dispatch medics to a particular location swiftly and easily.

The ultimate responsibility lies with participants to have a clean bill of health. What we can do is to respond fast enough so that we can give a casualty the maximum chance to survive. 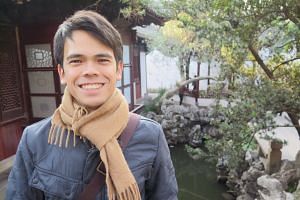 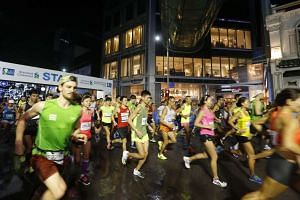 In a run full of life, death makes a terrible visit

At Sunday's SCMS, Gibson collapsed about a kilometre away from the finish line at the Padang, said race organiser Ironman Asia. He was attended to immediately before an ambulance arrived to take him to the Singapore General Hospital. The cause of death is still unknown.

This was the second tragedy to strike the annual event in recent years.

A site's design is one of the biggest challenges to any safety plan, noted Mok. He explained that sometimes, the location of a casualty could make it tricky for an evacuation to be done in the quickest possible time.

He said: "I'll probably remind my team on how an evacuation route can be clear. A key challenge is how accessible a location is for an ambulance to access.

"Places like the Esplanade Bridge area are landlocked, and with the volume of runners who are there too, it might delay the time taken for a person to be attended to."

Another key component of any safety plan is the number of medical staff available but Foo noted that it was not as simple as merely increasing the numbers for a bigger event. The nature of the event also has to be taken into account.

For example, he explained that his firm tends to double the number of medical staff available for the JP Morgan Run, even though it is only 5km. This is because shorter runs often result in athletes running at a faster pace, with some even resorting to sprinting. All this tends to increase the risk of something going wrong.

However, Foo also pointed out that the onus to ensure an athlete completes a race safely does not just lie with race organisers.

He said: "We'll always be ready to respond to these incidents, but there is no way for us to spot someone who can be healthy looking but with a hidden condition.

"The ultimate responsibility lies with participants to have a clean bill of health. What we can do is to respond fast enough so that we can give a casualty the maximum chance to survive."

Quek, who coaches Rio Olympian Neo Jie Shi among others, stressed the importance of pre-race conditioning.

Besides chalking up the necessary mileage, he also pointed out that many runners need to learn to get used to other elements, like the start times of runs, which tend to begin at the crack of dawn.

He said: "I believe many runners do not take breakfast or sleep before the run, because people are generally not used to having breakfast at 2am. But you cannot go into a 42km run without food.

"The human body is strong and doesn't break down easily. But good preparation will minimise chances of something going wrong."

Fellow coach and former national marathoner M. Rameshon, while agreeing that a proper build-up is important, also stressed that athletes should approach an event with the correct mindset.

While everyone aims to complete a race and to improve their times, they should also exercise common sense and stop or pull out if they are not feeling well.

Citing himself as an example, he said that during one race, he had stopped running halfway when he felt his body turning cold.

Urging runners to set their ego aside, he said: "A lot of people think that, 'I don't care, I will never give up and I'm going to complete it no matter what happens.' But it's OK to stop. There is always another race."

While running enthusiasts point out that the activity is largely safe - a study done in the United States revealed that out of 11 million runners who took part in half- and full marathons between 2000 and 2010, 59 had a cardiac arrest, out of which 42 died - experts urge athletes not to take their health for granted.

Particularly when comprehensive screenings - while not 100 per cent fool-proof - can help detect health anomalies or an underlying medical condition prior to a race.

Dr Julian Tan, a cardiologist at Mount Elizabeth Hospital, said: "Those who do not usually exercise but want to embark on an intensive run should get themselves screened to make sure that they are clear of any heart conditions."

He recommended that one should undergo an echocardiogram (an ultrasound examination of the heart) and a treadmill test. An Echo costs about $300, far higher than a $50 electrocardiogram (ECG) but he said these can help provide more than just a "snapshot" an ECG gives.

While many would likely baulk at the higher costs of a more thorough screening, some organisers have been trying more novel ways to get athletes on board.

In 2014, KM Duathlon, an event organised by Infinitus that has been discontinued, offered a discounted health screening package to participants when they signed up.

Those with a history of issues such as light-headedness, heart palpitations, as well as older people, should be flagged to go for such screenings - especially if they are attempting endurance events for the first time, said specialist sports physician Patrick Goh.

Despite the advice, not everyone feels compelled to go for one.

National serviceman Nicholas Goh, 20, who ran the SCMS marathon, felt that going for a test is not necessary for now because he is just a leisure runner.

He said: "I would not push so hard to the extent where I know that I cannot do it. But I am reconsidering whether I should go for a test because there is no harm doing it."

National marathoner Fang Jian Yong, 27, felt more at ease after going for medical tests including the ECG and the treadmill test.

The masters student at the National University of Singapore, who was the third local male marathon finisher at the SCMS, said: "As competitive athletes, we always push our limits and during training sessions, we have hard workouts and sometimes we feel breathless.

"I feel a bit safer and it's a wise choice to do the tests because my heart rate is not very consistent and stable."