Standing on the ice seconds before her short track speed skating 1,500m heat, Cheyenne Goh's mind was blank, save for the Korean phrases "apeuro" and "geogi isseo" - which roughly translate to go to the front and stay there.

Those were instructions from her coach, four-time Olympic champion Chun Lee Kyung, before the 18-year-old Goh made her - and Singapore's - Winter Olympics debut at the Pyeongchang Games.

The teenager managed to execute those orders early in the 13.5-lap race at the Gangneung Ice Arena. She was third out of six after the fourth lap, before falling back after touching the ice with the wrong part of her glove during a turn, and losing her balance.

She finished fifth in 2min 36.971sec - far from her 2:31 personal best - and did not qualify for the semi-finals. South Korean Choi Min Jeong won the gold, with China's Li Jinyu and Canadian Kim Boutin filling the other podium spots.

Of her stumble, Goh told The Sunday Times: "When I leaned into (the turn), it wasn't smooth. It was a lot more friction than I anticipated and I lost my balance.

"I should have tried to keep the gap closer and definitely been more careful about the skating because, had I not stumbled, maybe I would have been closer for a while."

Even seasoned champions like Shim Suk Hee, runner-up in the event at the 2014 Sochi Games, were prone to mistakes. The Korean fell during Heat 1, was eliminated and refused to be interviewed later at the mixed zone.

When I leaned into (the turn), it wasn't smooth. It was a lot more friction than I anticipated and I lost my balance. I should have tried to keep the gap closer.

The mood was more upbeat in Goh's camp, despite her mistake. Asked if she had panicked after losing her balance, she laughed, before replying: "I just felt really stupid."

There were a lot of positives to draw from this experience, she added, "before I fell back (was the highlight).

Her coach Chun was proud and said: "I'm happy (with how she did) although it was a bummer that she couldn't catch up."

Goh, who was interviewed by both Korean and international media after her race, said the tactic of positioning herself at the front was new to her.

"It was a strategic thing based on my abilities. If something went on behind me I wouldn't have got caught up in it... it's not that one tactic is better than the other," she added. 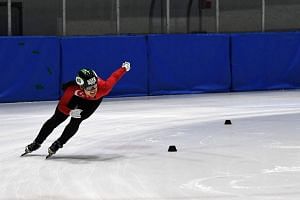 Winter Olympics: A moment to savour for Cheyenne Goh 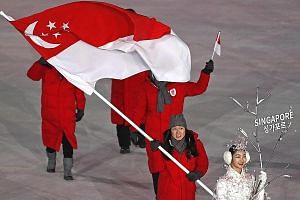 She finished 46th in both competitions last year and said the past month spent training in South Korea has given her the confidence to improve on those results.

She said: "I'm really excited to be able to race again because I think this competition has got me into the mood for racing."

Her race and Olympic debut completed, Goh had only one other thought last night - celebrate and indulge her craving for fast food.

"I've had a quarter pounder and maybe tomorrow, if I have the time, I'll get a McFlurry," she said.

After all, there is always more work to be done to get better, said Chun.

"More load for training and she will have to do more training.

"For now, she has to go back to the start line, tie her shoelaces again and do it (start racing) again."