While some swimmers may crumble at the sight of strong opponents, Toh Wei Soong sees it as a test bed to gauge himself against the elite.

It is that willingness to see the glass as always half full, to push harder and to go farther, that reaped rewards aplenty at the ongoing Asian Para Games in Jakarta.

The 20-year-old won his third medal, a bronze, in the men's 100m backstroke S7 with a personal best of 1min 20.21sec as he wrapped up his campaign at the Gelora Bung Karno Aquatic Centre yesterday.

Toh had won the 100m freestyle S7 title in a PB of 1:03.16 on Tuesday and another gold in the 50m freestyle S7 on Sunday to complete a hat-trick of medals in his events.

Although he did not stand on top of the podium, Toh, who had been diagnosed with transverse myelitis (an inflammation of the spinal cord, which restricts the use of his legs) when he was two, believes he delivered his best performance yesterday.

"That was the best I had swum at this meet despite me not winning the gold," he told The Straits Times. 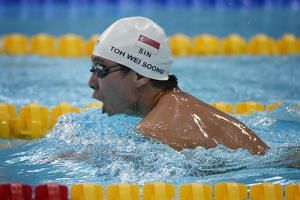 "That's because every competitor is very talented. I had to fight every metre of the race and I know that this experience will get me stronger."

Key to that strong swim was to embrace his fear and harness it as a form of positive energy.

Toh said: "I had strong challengers around me for this race. If I am prepared to do what it takes to win, I must also be prepared to lose. I cannot be afraid of losing. So I tapped into my courage and kept giving my best."

With his Asian Para Games medals tucked away, it marked a breakthrough year for the swimmer, who had also won a 50m freestyle bronze medal in April's Gold Coast Commonwealth Games.

That followed two golds and a silver at last year's Asean Para Games.

He will now take a short break to travel, write a book yet to be entitled, as well as "tinker with other artistic projects" like film making and music production.

But he will not neglect the pool in his relentless quest to his ultimate goals in the water.

He said: "These Games proved that the freestyle technique I had worked on in the past few months is correct but I still need to learn a few new tricks for backstroke like controlling my breathing.

"I always believe that I could have done better.

"The long-term plan is to compete at the Paralympics but my immediate goal is to get as strong as possible. Failure comes when one succumbs to stagnation."

Singapore's medal haul at these Games, which end on Saturday, stands at three golds, one silver and four bronzes.

A version of this article appeared in the print edition of The Straits Times on October 11, 2018, with the headline 'Just bronze in backstroke but Toh says it's his best swim'. Subscribe
Topics:
More
Whatsapp Linkedin FB Messenger Telegram Reddit WeChat Pinterest Print Purchase Article Copy permalink