With a historic swim that yielded Singapore its first Olympic gold, Joseph Schooling has single-handedly showed the nation that what seems unthinkable can be possible with relentless belief.

Building on what his achievement has inspired will be critical in ensuring the ripple effect brings sustained - and even greater - success at future Games.

In a post-Games wrap held yesterday, key officials representing the Team Singapore contingent and Singapore Sports Institute said this will be one of the most important takeaways from the Rio Games.

Chef de mission Low Teo Ping said: "Now that Joseph has delivered something that has got the whole nation galvanised, what is required is that the country come together and go all out and make sure we can repeat it, and even do more.

"Use this opportunity to bring others through and follow suit.

"I look at these Games as an opportunity to really state a very clear vision for Singapore. We need to have a national agenda and narrative, rather than depend on individual sports to see how they roll along and emerge an athlete or two, or a team here and there.

"That's something which we will definitely be looking into as we go back and do a certain amount of soul-searching."

The National Youth Sports Institute - which serves young athletes - together with the Singapore Sports Institute (SSI) are two organisations that will be expected to play a considerable role.

Said SSI chief Bob Gambardella: "We're creating a seamless activity of identification and development of athletes and getting what we call 'podium-ready'.

"We can't rely on social Darwinism that (athletes with potential) will rise to the top.

"We've got to have an aggressive programme and approach that identifies these athletes from a certain age, so that when they're at this level, everything has already been done."

Team officials applauded the Republic's 25 athletes for their efforts at these Olympics, even if on paper, most of the athletes' - bar Schooling and Quah Zheng Wen - had fallen short of targets. Schooling's gold was Singapore's lone medal in Rio.

Table tennis, in particular, returned empty-handed for the first time in three Games after unsuccessful campaigns in both the women's singles and women's team events.

Said Low, who gave the contingent a top A+ grading: "We're very pleased with what's been achieved and honoured that Joseph carried the Singapore flag way higher than other Games we've been involved with.

"The Olympics are a very high-level competition. All of them lived up to what was expected of them in terms of performance and doing their level best."

Added Gambardella: "We all would like to win and put medals on the table. I've been very proud watching our athletes in total ... it's the way the athletes handled themselves. 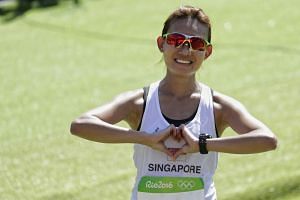 "There are some things we can address moving forward. In terms of (the) developmental process, there's no magic potion - just a long, sustained approach for that athlete at that given time."

Team Singapore athletes have begun to return home in batches following the conclusion of their competitions.

Low gave credit to the support staff from both the Singapore National Olympic Council and the SSI for an incident-free Games, despite having to grapple with issues ranging from accommodation to transport and logistics.

He said: "These have really been a very challenging Games. It was very much a team effort. One Team Singapore, like what we've always been saying, it really pulled various agencies that came together and worked towards doing the best for the athletes competing at this very high level."