DOHA (AFP) - Superstar Simone Biles made yet more gymnastics history in Doha on Thursday (Nov 1) when she became the first woman to win four individual all around world titles.

The unstoppable American won despite uncharacteristic errors in two of the disciplines, the vault and beam, to claim her 12th world title.

"Didn't mean to give everyone a heart attack," she tweeted afterwards.

"I apologise. I won't do that again."

The 22-year-old held off strong challenges from Japan's Mai Murakami who took silver and American compatriot, and 2017 champion, Morgan Hurd.

Biles did not dominate as many anticipated.

didn’t mean to give everyone a heart attack. I apologize. 🖤 I won’t do that again

She trailed after a poor landing on her first piece of apparatus, the vault, and also struggled on the beam where she came off.

Despite that, her winning margin of 1.693 is the largest of her titles.

However, Biles was not satisfied.

"I'm still pretty disappointed because I know what I can do out there," she said.

"It doesn't show who I am and that's kind of disappointing. But we have finals so hopefully I will redeem myself."

And she is on course to rewrite the record books several more times this week.

She now has 16 world championship medals, just four behind the record of 20 medals, set by Russia's Svetlana Khorkina.

And if, as highly likely, she wins one more gold medal in Doha - she already won a team gold earlier this week - it will make her the first gymnast, female or male, to win 13 world titles. 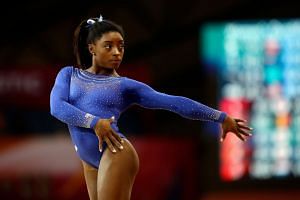 Biles is favourite for several medals in the individual events, which take place on Friday and Saturday.

Adding to her remarkable achievements is the fact she is performing despite a kidney stone problem which saw her rushed to hospital at the weekend.

She said on Thursday that the kidney stone was not an issue.

Her success comes after she took a year off in 2017, following her triumphant showing at the Rio Olympics, where she won four golds, including the all around.

Earlier this year, Biles revealed that she was a victim of former US team doctor Larry Nassar, who was sentenced to up to 175 years in prison on charges of sexual assault.

Also creating a record on Thursday was Murakami as she is the first Japanese gymnast to win world silver at this event.

Hurd said she felt "pretty good" with her bronze medal.

At one point Derwael headed the competition and looked certain to claim a medal but was outdone by superlative final performances by the top three.

Emphasising how close the competition was there was just 0.001 points between Derwael in fourth and the Russian a place further back.