JERSEY CITY, United States (AFP) - Tiger Woods withdrew from the Northern Trust ahead of his second round on Friday (Aug 9) with a "mild oblique strain" after struggling to an opening 75 the previous day.

The 43-year-old has failed to find his best form since ending an 11-year major championship drought with a stunning victory at the Masters in April after recovering from spinal fusion surgery.

The 15-time major champion stuttered to a four-over first round on Thursday which left him tied-116th out of 120 starters in the opening FedEx Cup play-off tournament in New Jersey.

"Due to a mild oblique strain that led to pain and stiffness, I have to withdraw from the Northern Trust," said world number five Woods in a statement.

The Northern Trust was his first appearance since missing the cut at the British Open last month.

Woods will need to play next week's BMW Championship at Medinah and overtake rival players in order to finish in the season's top 30 and earn a chance of defending his Tour Championship title in the campaign finale at East Lake. 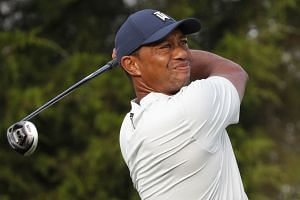 Golf: Woods near last after opening 75 at Northern Trust

"I'd like to thank the New Jersey and New York fans for their support and remain hopeful that I can compete next week at the BMW Championship," he added.

Woods sat 13 shots adrift of overnight leader Troy Merritt when he pulled out of the event, after his fellow American fired a course record-equalling 62 in the first round.