The 2015 Asia-Pacific Amateur Championship (AAC) winner came here in 2010 to take the PSLE and returned to China for high school in 2014.

"I used to cycle every afternoon after school to the Singapore Island Country Club to play golf," said the 20-year-old.

Jin is not alone in spending his teenage years outside China among the Chinese players who played in the Oct 4-7 AAC at the Sentosa Golf Club, won by Japanese golfer Takumi Kanaya.

Andy Zhang and Bai Zheng Kai moved to the United States at 10 and 16 respectively. Lin Yuxin, who won the AAC in 2017, is based in Beijing but is home-schooled.

Golf has long occupied a tenuous space in the world's most populous country since it was stigmatised by Mao Zedong as a "millionaire's sport", but the winds of change have been blowing for some years. 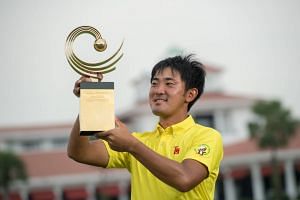 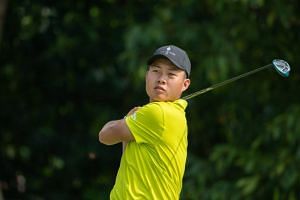 Golf: Defending champion Lin Yuxin of China leads by one with course-record 62 at the Asia-Pacific Amateur C'ship

"I think China is really trying to grow the game of golf, and the game has really been made more public and accessible to kids now than before," said Zhang, 20.

"There are more professional events in China now, which gives Chinese players opportunities to be able to participate and compete against the world's best," said Jin.

"I think that helps a lot in not only our game but also mentally, knowing how good we need to be in order to play on the biggest stage in the world."

There are nearly 40 men's professional events on the calendar for China in 2018, across the China Tour, European Tour, European Challenge Tour, PGA Tour China and Asian Tour.

The latter two tours did not feature on the calendar in 2017.

Li Haotong, who was third at the Open Championship in 2017, is the country's highest-ranked male golfer at No. 55.

Feng Shanshan was the top female golfer in the world at the start of 2018 but has since fallen to No. 9.

"It is incredibly exciting now. I think as the game develops here in Asia, China will push the quality up and that's great for golf," said R&A chief executive Martin Slumbers.

"We mustn't forget that golf is sport and sport is about getting better so you can win.

"So the more Chinese golfers who are coming through hungry to beat the rest of the world, the better it is for the game."