BETHPAGE (AFP) - Tiger Woods skipped his last chance at a practice round over formidable Bethpage Black on Wednesday (May 15) in favour of an extra rest day before he launches his quest for a 16th major title Thursday at the 101st PGA Championship.

The 43-year-old American, who snapped an 11-year major win drought by capturing the Masters a month ago, has not played competitively since. He practised last week for more than five hours at Bethpage and played a nine-hole practice round early Monday.

"There's definitely going to be a component to stamina as the week goes on," Woods said Tuesday.

"Four days over a tough championship that is mentally and physically taxing takes its toll."

Woods is scheduled to start from the 10th tee at 8:24 a.m. (1224 GMT) alongside the other reigning major champions, British Open winner Francesco Molinari of Italy and defending champion Brooks Koepka, who seeks his third consecutive US Open title next month at Pebble Beach.

"Physically I've been feeling really good. The training sessions have been good. I've been doing a lot of practicing of late," Woods said Tuesday of his workout regimen.

"We came up here last week, took a look at it in detail and spent a lot of time on it. This is not only a big golf course, but this is going to be a long week the way the golf course is set up and potentially could play." 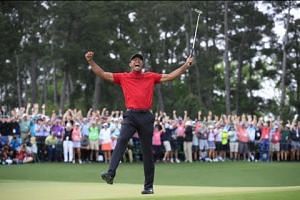 Golf: Tiger Woods wins first major in 11 years at Augusta and his 15th in career

ST Podcast: Tiger Woods' great comeback at 43; Can badminton do more to be a truly global sport?

Woods could become the first golfer since Jack Nicklaus in 1975 to win the Masters and PGA Championship in the same year, although this marks the first time since 1949 the PGA will be played in May, moving from its traditional August spot in a revamp of the global golf schedule.

It was only in 2015 that Jordan Spieth won the first two majors of the year, the Masters and US Open, before sharing fourth at the British Open.

Woods won the 2002 Masters and took the 2002 US Open at Bethpage before sharing 28th at the British Open.

Sixth-ranked Woods would become world number one for the first time since March 2013 by winning the PGA, having top-ranked Dustin Johnson finish solo 11th or worse and neither England's second-ranked Justin Rose or third-ranked Koepka finishing second alone.

It was just 20 years ago that Woods wondered if he would ever win more than one major before he outdueled Spanish teen Sergio Garcia to take the 1999 PGA at Medinah.

"That was a big moment because at the time I'd won one major by 12 shots and hadn't won since then, and it was a big deal to get a second major championship and get the numbers to start to accrue," Woods said.

"To be able to hang in there and somehow get that done, it just helped keep the momentum going from '97 and then not winning anything in '98. It just started the momentum and you can see what happens in 2000, 2001 and 2002. But '99 was a big moment to kick start all that transpired."

That included major knee and back injuries that Woods feared might rob him of a normal life until 2017 spinal fusion surgery allowed him to return to golf.

In 2018 he won the Tour Championship and contended in two majors and last month he took a fifth green jacket at the Masters.

"Anything post these back surgeries is a bonus," four-time major winner Rory McIlroy said of Woods. "I still don't think people understand what he did in April and coming back and with everything that he's been through. It's unbelievable.

"Whether it's the greatest comeback in sports, that's probably up for debate, but from what I've experienced and the things that he said when I've been around him, to be 2 1/2 years ago from looking like maybe not playing golf again to winning the first major of the year and being the favorite going into the second, that's unbelievable."