SINGAPORE - Pressure, they say, creates diamonds and having to compete with regional golfers for a slot at the HSBC Women's World Championship helped Amanda Tan to top a field of 18 and earn the right to join the elite later this month.

The Singaporean trailed by three strokes overnight and had doubts about her swing after the first of the two-day qualifying tournament, the first time it has been open to players from throughout the region.

But she harnessed the apprehension and strain and turned them into a positive mindset to claw her way to the top of the leaderboard on Monday (Jan 31).

She carded a two-under 70 for a 142 total to pip 16-year-old Thai Aripichaya Yubol (71) by two strokes at Sentosa Golf Club's New Tanjong Course to earn a sponsor's exemption.

Another Thai, Kanphanitan Muangkhumsakul, 20, had begun the day as the overnight leader after a 69 on Wednesday but faded with a 79 to finish fourth.

Amanda, 19, said: "I was not feeling too great with my swing (on the opening day), but I tried to keep it (the ball) in play. 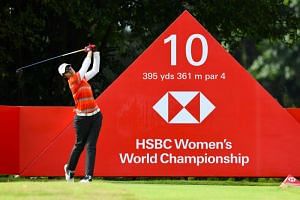 Golf: Top 20 in rankings all ready for HSBC Women's World Championship in Singapore

"And, if there was a chance for a birdie, I'd take it. If not, par would be good. I didn't think I would win until the last hole, last putt."

She will be part of a 63-player world-class field at the Feb 28-March 3 tournament which features defending champion Michelle Wie as well as the world's top 20 - led by Thailand's Ariya Jutanugarn and Korean duo Park Sung-hyun and Ryu So-yeon.

Said Amanda: "(Finishing in) the top 10 would be nice. It will not be easy, but I am going to give my best and to enjoy and learn from the experience.

"This tournament is special to me as it was my first pro event in 2014 and it's also my first event after I turned professional in 2017."

Previously, Singaporean players were given a slot after the completion of the national qualifying tournament. This year, the format was expanded to include 18 Asian golfers from six countries (China, Indonesia, Malaysia, the Philippines, Singapore and Thailand).

The new and tougher format has earned the thumbs-up from the golfers even if only one out of the 18 participants managed to get her ticket punched.

Amanda, who plays on the China Tour, said: "It's good to have qualifying and, although it is a lot more competitive, I get the chance to play against overseas players."

Arpichaya added: "Because this is a big tournament, I feel it is okay for just one of us to qualify for the finals. That means, only the best can go."