SINGAPORE - While most golfers at the SMBC Singapore Open headed for a meal, a massage or nap on Friday (Jan 17) after a sapping 18 holes in the second round, Matt Kuchar played table tennis with Iulia Necula, a former Romanian player who competed at the 2008 Beijing Olympics.

The 41-year-old American lost 4-1 to Necula at the clubhouse, but the game of ping pong did little to stop him from clinching the other clubhouse lead the next day.

He hit a flawless nine-under 62 in Saturday's third round at the Sentosa Golf Club's Serapong Course to surge to the top of the leaderboard with a 17-under total and a three-shot lead over defending champion Jazz Janewattananond and Miguel Tabuena at the US$1 million (S$1.35m) event.

The 2016 Olympics bronze medallist told The Straits Times: "I finished my round early on Friday, so I asked the organisers if they could help arrange a table tennis or badminton game. I played a lot of table tennis growing up with my dad and I really enjoyed the sport."

Kuchar was in luck as Necula was attending the event as a guest and happily obliged. He added: "It was a good game against Iulia, and she beat me in dress and heels too.

"I don't feel any impact on my fitness. Funnily enough, when I have played some tennis in the mornings of some PGA Tour tournaments, I tend to do pretty well in my golf rounds too."

While Kuchar, who would have taken the course record if not for playing on preferred lies due to the afternoon showers, did not take on another table tennis contest after returning to the scoring booth in the second-last flight, he is eyeing his first SMBC title on Sunday.

"It was a fun day today, starting with birdies on the first two holes," said the golfer, who won the Sony Open last January. "The plan tomorrow is to find the first fairway and first green, and take advantage of all three par-fives like I did so far (10-under)."

Kuchar will have to be wary of Jazz, who recovered from a bogey on the par-four Hole 5 to record five birdies and stay in contention. The 24-year-old Thai is aiming to become the first since Australian Adam Scott in 2006 to retain the Singapore Open title.

He said: "Nothing was going my way in the front nine, so I should be happy with my score today. It will be great if I can defend my title, but Kuchar is in form right now. It will be fun to see if I can do it by playing my best golf tomorrow." 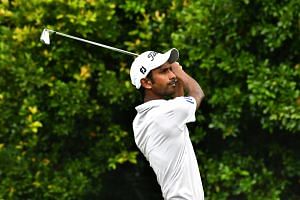 There were also cheers for local golfer James Leow, who continued his fine run since winning the SEA Games men's singles gold last month and making the cut at the Hong Kong Open last week.

Teeing off from the 10th, the 22-year-old amateur had the crowd buzzing with excitement with six birdies through his first 14 holes.

A bogey on the par-five Hole 7 meant he had to settle for a five-under 66 that was still the day's joint-third best score. He sits joint-19th with a four-under total, 13 shots off the lead but five ahead of Olympic silver medallist Henrik Stenson of Sweden.

British Olympic champion Justin Rose is sixth with a 11-under total.

Leow, who also made the cut in his two previous appearances here in 2016 and 2019, said: "Making the cut for the national open is definitely something big for me.

"The plan was always to keep my tee shots on the fairway, and today I was more accurate off the tee and I was reading the putts right on line.

"It would be nice to break par again... I just want to give myself as many opportunities on the green and take them."