ST LOUIS (AFP) - Rickie Fowler, a top-five finisher twice in every major without a win to show for it, fired a five-under par 65 on Thursday (Aug 9) to grab a two-stroke clubhouse lead at the 100th PGA Championship.

While Tiger Woods and Rory McIlroy each grinded to level-par 70s at Bellerive Country Club, ninth-ranked Fowler fired his lowest of 31 career rounds in the event, making six birdies against a lone bogey to seize command.

“I’m definitely happy about the start and we’ll see if we can keep that rolling,” Fowler said. “I kept it very stress free. Just played within myself.”

Considered a solid contender to win a major in his 20s when he turned pro at age 20 in 2009, Fowler has one final chance to lift a major trophy before turning 30 in December.

“I always have hope,” Fowler said. “I know Phil (Mickelson) didn’t win until his 30s. It’s not something I necessarily worry about.”

Fowler, whose Masters runner-up effort in April matched his best major finish, had four top-five major showings in 2014, sharing second at the US and British Opens.

“Keep putting ourselves in position, get in contention,” Fowler said. “We’ll just keep beating down that door.” 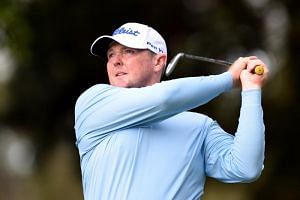 “It was just a good tee to green solid ball striking day,” Fowler said. “You pray to have that for four days.”

Fowler followed with a 31-foot birdie putt at the par-4 seventh hole and blasted from a bunker to eight feet to birdie the par-5 eighth.

“What’s maybe helping this week is not trying to overpower it,” Fowler said. “Get me in the fairway and with the soft greens, I feel like we can pick apart the golf course.”

With half the field of 156 still on the course, a second-place pack on 67 included England’s Ian Poulter, Australian Jason Day and Americans Pat Perez, Brian Gay, Stewart Cink, Austin Cook and Ollie Schniederjans.

“I got off to a flying start,” Poulter said. “It was a good day. I feel pretty comfortable.” Day, the 2015 PGA winner, birdied two of the last three holes.

“I’m very happy with how things progressed out there,” Day said. “It’s always nice to get a round in like this, start your week knowing that you’re in the right direction.” .

Woods and McIlroy can’t say the same but each could have been much more off the pace after struggles in their star pairing with second-ranked defending champion Justin Thomas, who shot 69.

“Just hung in there. I was trying to chip away at it, pick away at it,” Woods said. “I was hitting the ball all right. If I could somehow get myself in the right sections, I could hole a few putts. I was able to grind out a score today.”

Woods, a 14-time major champion in a comeback season after spinal fusion surgery, opened bogey-double bogey thanks to deep rough at 10 and water at 11.

The former world number one had a tap-in birdie at 12 but needed two chips to escape the rough for bogey at the par-3 16th.

The 42-year-old American battled back with birdie putts from four feet at 18, nine feet at the first and eight feet at the par-5 eighth.

“I hung in there and turned it around,” Woods said. “Just happy to be within five.” Woods briefly led in the final round of last month’s British Open, but he hasn’t won a major since the 2008 US Open or any title since 2013.

Four-time major champion McIlroy found a bunker at 10 and made bogey, then sank birdie putts at 11 13, but made bogey at 18 and parred in from there.

“It wasn’t that easy out there,” said McIlroy. “I gave myself a few chances. I finished off with nine pars. It could have been a little better.” Thomas, who won last week’s WGC event, could join Woods as the only men since 1937 to win consecutive PGAs.

“Definitely a lot more positives to take the negatives,” Thomas said. “I’m in a good position for Thursday.”