CARNOUSTIE, Scotland (REUTERS) – Jordan Spieth has a chance to keep pace with Tiger Woods’ major championship tally after vaulting into a share of the third-round lead at the British Open on Saturday (July 21).

The defending champion never looked back after making a “dream start” en route to a six-under-par 65 for a three-way tie with Xander Schauffele and Kevin Kisner at Carnoustie.

In perfect conditions for low scoring until a brisk breeze sprang up just as Spieth was finishing, the 24-year-old Texan drove the first green and sank a 12-foot eagle before adding four birdies.

He earned the 54-hole lead at a major for the sixth time in his young career, giving himself a chance of becoming the first since Woods in 2005-06 to win back-to-back titles at the Open.

Schauffele birdied the last for a 67, while Kisner shot 68 as the two Americans joined Spieth at nine-under 204.

They have a two-shot edge over American Kevin Chappell, and a three-stroke cushion over in-form Italian Francesco Molinari.

On a day when Woods electrified the gallery with a 66 that pulled the 14-major winner within four strokes of the lead, Spieth, with three majors already, showed again that he is the man to beat of the next generation. 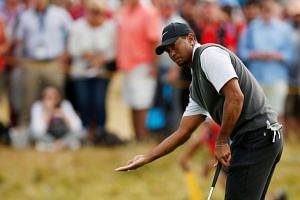 Golf: Woods charges into contention with third-round 66 at Carnoustie 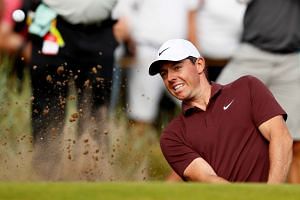 Unhappy with his swing during the first two days, the 24-year-old found a slight adjustment did the trick, and the first hole provided a massive jolt of confidence.

“I feel like I’ve been improving each day (but) I know as well as anyone that anything can happen at an Open on Sunday,” he said.

“I got a couple of good breaks but I wouldn’t say I drew on anything except the adjustments I’ve made during the week in my game to feel more comfortable over the ball.”

Spieth will have four major titles before his 25th birthday if he wins on Sunday.

Woods was also 24 when he collected his fourth major in 2000, while Jack Nicklaus and Rory McIlroy were 25 when they reached the mark.

But Spieth is not focused on history.

“I felt like I had something I had to prove to other people at last year’s Open, and to myself,” he said.

“I don’t feel like I have to prove anything to anyone at this point.

“I’m playing golf for me now. I’ve made a lot of progress over the year... and I’ve got an opportunity to make it a very memorable one.”

If Spieth was satisfied with his day, Woods was positively delighted to put himself within striking distance in his quest to end a decade-long major drought.

“It’s been a few years since I’ve felt like this,” he said after his best score in a major since the 2011 Masters.

He vaulted into a tie for sixth in a group that includes Rory McIlroy (70) and Tommy Fleetwood (71), who were left by the wayside on a day of low scoring.

“I’m right there. I’ve got a chance at this, which is great. I had to stay within reach,” Woods continued.

He got a lucky break at the last, where his pulled tee shot came within inches of landing in the Barry Burn.

“I didn’t know if I carried it or not, if it was in the hazard or rough. It was a terrible two-iron,” Woods said.

“I really didn’t feel like I really made a bad swing until 18.” His ball stayed dry but with 246 yards left to the hole he decided to lay up from the rough before punching a 100-yard wedge to three feet and saving par.

Earlier, Justin Rose set the tone with the lowest score in Carnoustie’s British Open history, a flawless 64 that by day’s end had lifted him within five of the lead.

“It was a beautiful morning to play golf. The greens were somewhat receptive, and the pins weren’t as tough as maybe the first couple of days,” Rose said.