AUGUSTA, GEORGIA (REUTERS) - Jordan Spieth carded five birdies over his final six holes to power his way to a two-shot lead at the Masters on Thursday (April 5) but that spectacular finish was overshadowed by Tony Finau, who penned a bit of Augusta National folklore as he hobbled into contention.

On a day that saw Tiger Woods back at the Masters for the first time since 2015 and reigning champion Sergio Garcia record a 13 - the highest score ever for a single hole at the tournament - it was Finau who stole the show by grinding out a 68 to join Matt Kuchar on four-under.

Spieth, the 2015 champion and runner-up in 2014 and 2016, sputtered through his first seven holes, mixing two birdies with two bogeys, before carding an eagle at the eighth, then reeling off five straight birdies from the 13th.

The three-time Major winner signed off with a bogey at the last for a six-under 66 to leave him alone in top spot.

"It's round one and I know as well as anyone anything can happen here at Augusta," said Spieth, who has now held the first-round lead in three of his five Masters.

But it was an inspiring performance by Finau that had the golf world buzzing.

Finau's first Masters was in danger of being over before it even started when the 28-year-old suffered what appeared to be a gruesome ankle injury while celebrating a hole-in-one during Wednesday's Par Three contest. 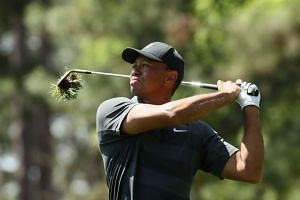 Golf: Tiger shoots one over par in Masters return

Golf: In the drink! Day sends shot into fan's beer cup at Masters

The cheers turned to gasps as his ankle dislocated, sending him to the hospital for treatment and an MRI.

Not willing to surrender his chance of playing in the year's first major, Finau limped up the leaderboard ahead of a glittering array of Major winners.

"It's been pretty crazy," Finau told reporters. "To be in this position I'm at now; when I woke up this morning, nothing short of a miracle if you ask me.

"But obviously, after the MRI we had, you know, there was no real damage. So at that point, at about 8:00 this morning, I knew I was going to play."

Lurking three shots back is a pack of seven golfers at three under that includes Major winners Henrik Stenson and Rory McIlroy, who needs a Green Jacket to complete a career Grand Slam.