In wild weather on the par-73 Plantation Course at Kapalua, Hawaii, Schauffele managed to shake off his early impatience and notch five birdies without a bogey on the way to a nine-under total of 137.

He was one stroke clear of US compatriot Patrick Reed and overnight leader Joaquin Niemann of Chile.

Reed grabbed eight birdies in a seven-under 66 and was joined on eight-under 138 by Niemann, who carded a one-under 72.

American Rickie Fowler was alone in fourth after a 71 for 139, one stroke in front of Patrick Cantlay (71) and Justin Thomas (73) - who closed with back-to-back bogeys.

"It was an interesting day," Schauffele said.

Play was halted twice - with players remaining on the course - when heavy downpours left standing water on the course.

"I wasn't really thinking about my score just because I was trying to stay as dry and warm as possible," Schauffele said. "I got kind of frustrated early in the round, I was missing a few putts here and there. It was windy, the ball was moving on the greens.

"My attitude was a little iffy, I'd say, at times. Once the monsoon came through it was kind of a nice time for me to relax and let it pass."

After birdies on the front nine's two par-fives, the fifth and ninth, Schauffele rolled in a 12-footer at the 13th and buried another from 12 feet to take a share of the lead at No. 16.

He drained a seven-footer at the par-five 18th to grab sole possession of the lead from Reed - whose 66 matched Niemann's first-round effort as low round of the tournament.

Reed had jump-started his round with a 41-foot birdie putt at the fourth and followed up with a two-foot birdie at the next before rolling in three birdies in a row at the eighth, ninth and 10th.

Another brace of birdies at Nos. 13 and 14 was followed by his lone bogey of the day at No. 15, but he pulled a shot back with a birdie at the 17th.

Reed said a triple-bogey at the seventh hole on Thursday had galvanised him.

"Coming out today, I kind of had a clearer plan of what I needed to do to fix my golf swing for today. Next thing you know, I started hitting the ball better and started making putts." 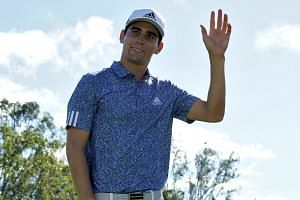 Golf: Dustin Johnson says he should be winning more often on PGA Tour

Reed was at the centre of a rules controversy at the Tiger Woods-hosted Hero World Challenge in the Bahamas in December, where he was penalised after taking practice swings that moved some sand in a bunker.

Although partisan fans at the Presidents Cup in Australia heckled him mercilessly over the affair, Reed delivered a Sunday singles win to help the United States beat the International team in the matchplay showdown at Royal Melbourne.

After some time to reflect, Reed said he had fond memories of the trip Down Under.

"(I) just absolutely enjoy going to battle," he said. "Fans were hostile, which you would expect, but I would never have missed it."