PARIS (REUTERS) - Friday's (Sept 28) foursomes whitewash was "right at the top" of Ryder Cup sessions in memory, European captain Thomas Bjorn said after his team turned around a disappointing morning to close the first day with a 5-3 lead.

Europe painted the scoreboard blue in a blustery session on Friday as the United States team struggled to find the fairway on a French course that demanded pin-point accurate shot-making.

"When you clean-sweep, that is something that is pretty special to all those players that are out on that golf course," Bjorn told a news conference.

"We got those crowds behind us. We got them going. They started believing ... then it seemed like nothing could go wrong."

But the cool-headed Dane made clear his players would have little time to savour their wins before refocusing ahead of Saturday's play.

Bjorn had special praise for British Open Champion Francesco Molinari and rookie Tommy Fleetwood, who in the morning left Tiger Woods licking his wounds on his much-anticipated Ryder Cup return before defeating Justin Thomas and Jordan Spieth in the second session.

"They just love playing to each other. I think they just have a very special bond and relationship, and they have for a long time, and they love being on the golf course together." 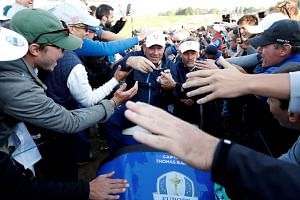 Molinari and Fleetwood's morning win had spared Europe the worst possible start, and a less daunting challenge in the afternoon, Bjorn said.

"That two guys stand up and hole the putts on 15, 16 and 17 to win the match when it really matters, it gives them belief, but also gives their team mates a hope," the Europe skipper said.

Going out as the third pairing in the afternoon, wildcard Sergio Garcia and debutant Alex Noren stunned Phil Mickelson, making his 12th Ryder Cup appearance, and US rookie Bryson Dechambeau, racing to a seven-hole lead after nine holes.

Mickelson and Dechambeau could only look on with envy at the budding new partnership between the Spaniard and Swede.

"(Garcia) really is that type of guy that binds it all together in the team room," Bjorn said. "You know, they went out and did fantastically on the golf course, but with Sergio it's not just about what he does on the course."

After a torrid morning with the putter, Northern Irishman Rory McIlroy had to dig deep alongside Ian Poulter in the afternoon. A four-hole hot-streak as they turned through the back nine handed the European pair a two-hole advantage they would not relinquish.

Asked what he had told McIlroy during the lunch break, Bjorn replied: "The only thing I say to Rory is we go again. You go out there and you bring a different type of game.

"I never have any doubt in Rory McIlroy, because if I start doubting him, then I probably shouldn't be doing this job."