Our body holds about five litres of blood. For every blood donation, one unit (or 450ml) is withdrawn.

This is expected, but how exactly does this impact your performance as a runner?

A reduced Hb concentration will result in lower oxygen-carrying capacity. There is no doubt that your running prowess will be affected.

In 1995, a study published in the American Heart Journal evaluated 10 male cyclists before and after donating blood to test the effect of blood donations on exercise performance. Results showed a decrease in the maximal performance of all the cyclists for at least a week.

More recently, in 2016, a randomised controlled trial published in the Sports Medicine Journal found that maximal power output, peak oxygen consumption and Hb mass decreased for up to four weeks after making a blood donation.

Interestingly, both studies found that the submaximal performance of their test subjects was not affected.

Therefore, if you are a recreational athlete exercising at submaximal intensity, you should not have any negative experiences other than a higher-than-usual heart rate.

To recover faster after a blood donation, you may consider taking iron supplements.

A randomised controlled trial was conducted to investigate the effectiveness of iron supplements following a blood donation.

The results were published in the highly-regarded Journal of American Medical Association in 2015 and it was found that with iron supplementation, Hb recovery time was halved from a mean of 78 days to 31 days.

More drastically, for people who usually have low iron levels, their Hb recovery time dropped from a mean of 158 days to just 32 days.

As you can see, your running performance is not necessarily a barrier to donating blood.

If you are a competitive runner aspiring to set personal records, I would still encourage you to make a blood donation. 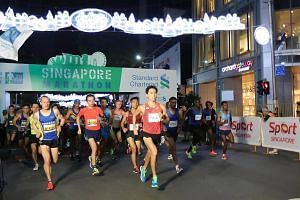 Fitness: Get your nutrition planning right as you prepare for Standard Chartered Singapore Marathon

You can plan your blood donation based on your running calendar. For example, you can do it right after a major marathon, as you would need downtime to recover from your race anyway.

Once you are physically ready to get back into training, your Hb levels should be ready too. However, if you have any reservations, an alternative would be to make a plasma donation, which will not affect your Hb levels at all.

You can run and donate blood.

Every hour, the hospitals in Singapore require 14 units of blood to save lives. Let's give our precious blood to someone who may need it for survival today.

A version of this article appeared in the print edition of The Sunday Times on November 04, 2018, with the headline 'Giving blood not a barrier for runners'. Subscribe
Topics:
More
Whatsapp Linkedin FB Messenger Telegram Reddit WeChat Pinterest Print Purchase Article Copy permalink