Every so often a phenomenon hits Formula One. At the Belgian Grand Prix in Spa-Francorchamps, it had a colour. Normally you associate green or grey with F1's greatest track, because of the trees or the rain-pregnant sky, but this year the hue was orange.

And it came in human form, with the thousands of spectators who flocked to the venue from Holland, proudly and loudly wearing their allegiance to teenaged nonpareil Max Verstappen in the form of their orange T-shirts, shorts, flip-flops and hats, and the odd smoke bomb that they lobbed.

F1 in Belgium had seen nothing like it since the days of Michael Schumacher.

The campsites were chock-a-block, the distant bridge carrying the motorway across the valley was jammed with stationary cars heading for the track. Inside, countless spectators stood waiting to be allowed into their viewing areas.

At a time when trackside audiences and TV viewers are said to be on the wane and that F1 is "boring" to a generation raised on virtual-reality computer games, here was proof that the right driver - in this case an 18-year-old with fast parents and a veteran's head on his shoulders - can ignite and inspire every bit as keenly as the heroes of yore.

At a time when audiences are said to be on the wane, that F1 is "boring" to a generation raised on virtual-reality computer games, here was proof that the right driver - in this case an 18-year-old with fast parents and a veteran's head on his shoulders - can ignite and inspire every bit as keenly as the heroes of yore. "Maxmania" had the place buzzing, but not everyone loves him.

"Maxmania" had the place buzzing, but not everyone loves him. The new kid on the block has already ruffled feathers.

Kimi Raikkonen followed him home in the Spanish Grand Prix, unable to challenge him. 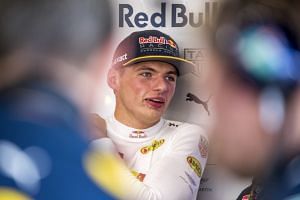 Verstappen is way too aggressive: Raikkonen

The Finn did likewise in Austria, then had a run-in with him in Hungary which left him criticising the teenager's driving ethics.

After a first-corner collision between the Finn and his Ferrari team-mate Sebastian Vettel on Sunday, which damaged both red cars and Verstappen's (blue) Red Bull, the two Ferrari drivers launched further attacks, even though most observers believed that Vettel had triggered his team's problem.

The German, who also criticised an innocent Daniil Kvyat in China earlier in the year after the Russian had the temerity to drive through the open gap that the four-time champion had left in the first corner, said, some thought patronisingly: "I had the best start from all the people in front of me. I was P2, Nico (Rosberg) was ahead but I was right behind on the outside leading the way into the first corner.

"I could hardly see Kimi because I was more than half a car ahead when I turned in, and to be honest he was already in the blind spot of Max.

"Just looking at it, it was a very bold move (by Verstappen) trying to recover those two places in one corner diving down the inside, and that obviously was the reason why Kimi couldn't turn in and follow the lead that I was dictating as the leading car of that group.

"The problem is you can't fit three cars in that corner and the inside one is able to trigger trouble to the outside and I think that's what Kimi and myself suffered from."

Raikkonen said of another incident in which Verstappen held his ground and obliged the Finn to run wide: "Come on, this is ridiculous, his only interest is pushing me off the circuit completely."

Later, when he accused Verstappen of forcing him to brake at full speed to avoid an accident, he added: "It's f***ing ridiculous.

"I'm all up for fair battles and close racing but when I have to back off on the straight when I'm making my move, that's not correct.

"I had to brake from full speed. I haven't had that with any other driver."

It was reminiscent of the fuss that MotoGP racer Jorge Lorenzo made when the late Marco Simoncelli was beginning to join the motorcycle racing elite they call the Aliens and how, when the Spaniard threatened action in a press conference if the Italian ever transgressed again, Simoncelli had brought the house down by asking: "What are you going to do, get the police to arrest me?"

Young cubs often upset their elders with their play, but Verstappen gave Dutch reporters his own robust rebuttal of the criticism.

"I'm just defending my position and if somebody doesn't like it, it's his own problem," he said.

"After Turn 1 when they do something like that, I'm not going to give up my position that easily afterwards.

"If they spoil my race, I'll spoil theirs."

Then he added, mischievously, "I hope the Ferraris keep moaning every race".

Ferrari faces were red, rather than orange.