The show will go on for the Formula One Singapore Airlines Singapore Grand Prix, after the deal to stage the motor-racing event was extended for four more years to 2021.

Now into its 10th edition, the Singapore event got a fresh lease of life just before the final race weekend of the previous contract.

Minister for Trade and Industry (Industry) S. Iswaran announced the contract extension at the F1 Pit Building at the Marina Bay Street Circuit. He cited three reasons for the protracted negotiations with new F1 owners Liberty Media, which were wrapped up only yesterday.

"First, with the changes in the ownership and management of F1, serious negotiations could commence only in February," said Mr Iswaran.

"Second, we wanted to understand the new management's vision and plans for F1, the importance and role accorded to the Singapore race, whether this was aligned with our own objectives.

"Third, we wanted to thoroughly evaluate the medium-term pro- spects for F1 and the value a term extension could bring to Singapore. I am glad that all parties have been able to agree on commercial terms for the extension."

The contract extension is for four years instead of five as in the previous extension signed in 2012, as the Singapore organisers would like to see the future direction of the sport after the expiry of the Concorde Agreement in 2020. The agreement is a contract between motorsports world governing body FIA, the F1 teams and the Formula One Group promotion companies, which determines how teams compete in the sport, and how television revenue and prize money will be shared.

F1 chairman and chief executive Chase Carey, who spearheaded Liberty's US$8 billion (S$10.8 billion) takeover of the racing series last September, was effusive in his praise for the series' only full night race. 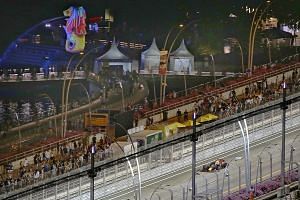 Now to make it a grand prix for all Singaporeans

Formula One: Drivers up to their necks in fitness training

For Felipe Massa, and his tribe, life is simply fast and furious

Mr Iswaran also revealed that, including this year's race, Singapore has hosted more than 450,000 international visitors, who have contributed about $1.4 billion in incremental tourism receipts.

The annual cost of hosting the race was estimated to be around $150 million, although Mr Iswaran said costs had come down by about $15 million a year to $135 million.

"The Singapore race remains the premier event in Asia, and its combination of music, food, business and sport is a template we like to see," he said. "After its heavy investment, Liberty certainly is a willing and open partner. The teams certainly are excited as there is a feeling that the sport hasn't reached its full potential. The focus is on the future."

Though there is a lingering perception the event is accessible only to the upper crust, Mr Iswaran pointed to outreach efforts to schools and opportunities for polytechnic and Institute of Technical Education students to be involved as race volunteers.

"We have made a concerted effort to reach out, working in partnership with Formula One and with Singapore GP," he said. "This will be an important part of our effort to make sure the race remains a very inclusive one, and also a very exciting one for everybody."