SINGAPORE- Hanoi joins the Formula One circus next year, an addition that is symbolic of the new direction owners Liberty Media hope to steer the sport.

The new Vietnam GP will mean a record 22 races next year and since Liberty's US$8 billion (S$11 billion) takeover in 2017, it has made no secret about wanting a 25-race calendar to grow profits. Previously untapped markets like Miami, Las Vegas, Buenos Aires and South Africa have been touted as potential stops to boost earnings in what Liberty calls "destination cities".

As the new kids on the block join what is already a packed race calendar, the 12-year-old Singapore Grand Prix remains very much part of the sport's future, F1's director of marketing and communications Ellie Norman told The Straits Times on Wednesday (Sept 18).

She said: "Singapore is recognised as a destination Grand Prix. It is executed brilliantly and brings in all the elements (entertainment, concerts, food and convenience for fans) we want to bring into the sport."

Liberty's expansion plans flag off as the sport comes up against headwinds. In February, although the F1 Group reported an increase in annual revenues from US$1.78 billion to US$1.82 billion, the operating loss grew from US$37 million to US$68 million mainly due to increased expenditure on the business.

Advertising and sponsorship income, which is regarded as a key area of growth, was reported to have fallen in 2018.

There were positives though, as they saw a year-on-year increase in combined attendance from 2016 to 2018, with 4.09 million turning out last year. Perhaps more significant was the jump in audience figures for last season, across both digital and TV platforms. There was a 10 per cent increase globally, reaching 490.2 million unique viewers.

With F1 targeting new audiences, Norman noted that Asia is a strategic priority and with races in China, Japan, Singapore and Vietnam, it has events that allow them "to reach different sets of fans while increasing the profile and interest in the sport". 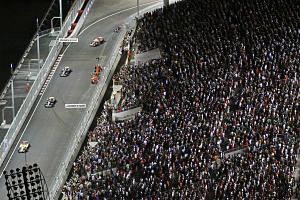 Motor racing: F1 race all set to flag off this weekend despite hazy skies

Once touted as "the crown jewel of F1" by former F1 supremo Bernie Ecclestone, the Singapore Grand Prix has delivered a win-win package for both the race owner and host, even if Singapore now has the integrated resorts which opened in 2010.

The 11 Singapore F1 races have brought in over $1.4 billion in tourism receipts and more than 490,000 unique international visitors.

She added: "The Singapore race offers tremendous value proposition and will continue to be a strong draw."

The Republic's contract with F1 ends in 2021 and negotiations between both parties are expected to begin next year.

Losing the F1 race would leave a gap in the calendar here as it is one of only a handful of major sports properties, said James Walton, head of Deloitte South-east Asia's sports business group.

"But a global financial slowdown, if it affected Singapore drastically, would affect any appetite for spending on F1, which may be seen as a luxury from the public," he added.

"Unlike Vietnam which is trying to showcase itself to the world, Singapore doesn't need to lose money on F1."