The victory was a landmark 70th for the Briton, who is well on his way to a fifth drivers' title and is now 21 wins behind the all-time record of 91 held by seven-time champion Michael Schumacher.

Hamilton's closest rival Sebastian Vettel, also a four-time champion finished third for Ferrari with Bottas, who led from pole position but was told to let Hamilton through after 25 of the 53 laps, taking second place.

Max Verstappen put in a storming drive from 19th on the grid after penalties for power unit replacements, to carve thorough the field and claim fifth place. His teammate Daniel Ricciardo, who also started at the back, was sixth.

Hamilton scored a solid victory - having briefly lost second spot to Vettel, he came back with a fine pass.

But the crucial moment was when Mercedes ordered Bottas to allow him past to ensure the win. The team have avoided using team orders previously but clearly felt they had to maximise Hamilton's advantage over Vettel. 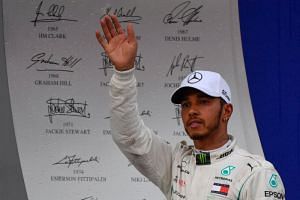 The team principal, Toto Wolff, was apologetic to a visibly disappointed Finn. "Difficult day for you and for us, let's discuss it later when we come together," he said.

At the podium ceremonies, with Russian President Vladimir Putin doing the honours, Hamilton manoeuvred the Finn onto the top step alongside him.

"It's actually quite a difficult day," explained the Briton. "He was a real gentleman to let me by. Usually I'd be elated but I can understand how difficult it was for Valtteri."

The Finn, without a win this season, had asked the team over the radio, more in hope than expectation, in the closing laps whether the order might change back. "Is this how we are going to finish the race?" he asked, before the answer came back in the affirmative.

Constructors' champions Mercedes remain unbeaten in Russia, Sunday being their fifth win in Sochi since the Olympic Park circuit first appeared on the calendar in 2014. Hamilton has now won eight races this season.