With soggy fans huddled under plastic ponchos and umbrellas, Red Bull's Pierre Gasly and Max Verstappen ended the day one-two on the timesheets in the drizzly second 90 minute session with Hamilton third.

The Briton's morning lap of one minute 17.233 seconds was still the day's best, with Gasly producing a 1:17.854 effort on the fastest soft tyres in the afternoon when the track was still suitable for slicks.

"This afternoon I only got a few laps on the hard tyre, then we stopped because running in the wet is kind of irrelevant when you know that the race is most likely going to be dry," said Hamilton.

Toro Rosso's Alexander Albon crashed soon after the first spots of rain, the Thai acknowledging driver error after going onto the grass at the last corner in an incident that brought out the red flags briefly.

Hamilton's Mercedes team mate Valtteri Bottas sat out the opening session while his mechanics changed the car's power unit but returned after lunch to post the fourth fastest lap.

The lost track time was still a setback for the Finn, who crashed out at a wet Hockenheim last weekend just when he looked likely to make inroads into Hamilton's overall lead and ended up 41 points adrift.

Hamilton, recovered from a bug that laid him low in Germany last weekend, has won a record six times in Hungary including last year from pole.

"I wanted to come back into the weekend feeling better and getting straight on it. The balance was quite nice straight from the get-go," he said. 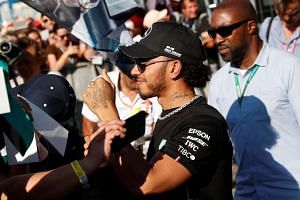 Formula One: Rested Hamilton hoping to be fighting fit for Hungary

Verstappen, the in-form driver with two victories from the last three races, was second on the morning timesheets but only a thousandth of a second ahead of Ferrari's Sebastian Vettel.

The Dutch youngster, who spun twice in that opening session, is expected to go well in Hungary, a track that should suit his car's characteristics.

"I think it was a good day for us and although Mercedes seem to be a little bit ahead we're very close which is positive," said Verstappen.

"The car seemed to work well in both wet and dry conditions."

Gasly was fourth fastest in the morning, with Danish driver Kevin Magnussen fifth for Haas and Charles Leclerc sixth for Ferrari.

"I think we had some room to improve," said Vettel of his morning performance. "Hard to see where we are compared to the others. We'll see tomorrow.

"In both conditions we should be thereabouts. Mercedes look very strong out of the box, straight away."