SINGAPORE - The individual, who posted on Facebook, that he had a bribed a security officer to allow him and a companion on the Singapore Grand Prix track to take a photo, has retracted his claims.

On Wednesday, a Facebook user going by the profile of Viv Smith, posted in a closed Formula One interest group that it was "time to come clean".

"There was no bribery, no corruption, no nothing. The barriers were down, the gates open. I asked the guard if he would take a photo of us and he kindly agreed," he wrote.

"There were others on the track also, one guy even skateboarding around it others just jogging."

The F1 fan, whose age and nationality are unknown, earlier posted a photo on Facebook, showing him and a companion posing on the tracks at the Marina Bay Street Circuit.

The caption read: "3am in the morning. Bribed the security guard to let us onto the track. He not only agreed, he took the photo." 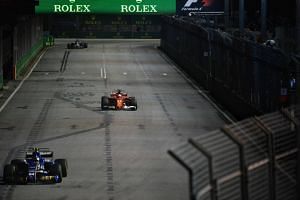 His post was shared and reported by online media which lead the race organisers to launch an investigation and the Singapore GP saying that it viewed the allegation of bribery as a serious matter.

When The Straits Times contacted him on Wednesday via Facebook, Viv Smith would only say that he is "lying low" in Malaysia and declined to be interviewed.

"Everything you need to know is in my second post, there is nothing else to say," he wrote.

Security & Risk Solutions (SRS), the appointed security agency assigned to the area where the alleged incident took place told ST that its security officers "did not compromise any safety instructions nor received any monetary rewards as allegedly claimed".

"We have interviewed all the security officers and we are satisfied that they were vigilant and had conscientiously followed the given instructions and performed their duty accordingly," a spokesman said.

SRS said it had submitted all its findings to Singapore GP, and will continue to work closely with them should there be any requirement for further investigations.

ST has reached out to Singapore GP for their comments.