SPA-FRANCORCHAMPS, Belgium (REUTERS) - Max Verstappen is refusing to get carried away with thoughts of a "home" win in Sunday's (Aug 26) Belgian Formula One Grand Prix despite leading a Red Bull one-two on the opening day of practice.

Verstappen went fastest in Friday's afternoon session, 0.256 seconds quicker than team mate Daniel Ricciardo of Australia, with a lap that surpassed Nico Rosberg's session-topping effort in the morning for Mercedes.

The two silver cars, who have won 43 of the last 50 races, were sixth and 13th respectively in the afternoon with Rosberg ahead of team mate Lewis Hamilton.

Red Bull, the only team other than Mercedes to win a race this year, have made significant gains of late, usurping Ferrari as the German outfit's closest challengers following the last race at Hockenheim.

But Mercedes' uncharacteristically low-key display on Friday had more to do with them focusing on race simulations, especially with Briton Hamilton set to start near the back of the grid due to engine-related penalties, than a sudden surge of Red Bull form. 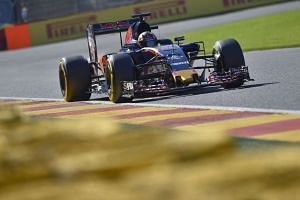 Formula One: Verstappen on top in Red Bull one-two

"They are very competitive," said Verstappen.

"For sure Mercedes will come back."

The Spa Grand Prix is the closest Verstappen has to a home race. The son of former driver Jos races under the Dutch flag but was born in Belgium to a Belgian mother.

Legions of his orange-clad supporters have arrived for the weekend and he could give them much to cheer especially if he is able to put his car on the front row in qualifying on Saturday.

"The fans were cheering me on which gives you a lot of motivation and it's great to see so many already on a Friday," said the 18-year-old who won on his Red Bull debut in Spain in May.

"We can definitely improve even more. We have to wait and see what they (Mercedes) do but so far I think we have a good car and a very good starting point."