The four-time world champion clocked a best lap time of one minute and 33.385 seconds to outpace the Finn by two-tenths of a second at the Sochi Autodrom where title rival Sebastian Vettel was fifth quickest.

Vettel, desperate to trim Hamilton’s 40-point lead in the championship, was 0.543 seconds adrift of the Englishman who continued to demonstrate his current rich vein of form after four wins in the last five races, including triumphs in Italy and Singapore.

“Sochi has been one of the weaker circuits for me in the past, particularly last year,” said Hamilton, who finished fourth in 2017.

“So I’ve done a lot of work to understand the balance and see where I can improve to try and rectify this – and today has been good in that sense.

“From every race we’re learning more and more and particularly the last few races have helped us to really gauge which foot we need to start on for the weekend.

“We’ve brought more upgrades this weekend and there’s so much work going on at home.

“It’s just really encouraging when you come to a race and you get an upgrade, knowing that this late in the season we’re also already working on next year’s car – it motivates me to get the best out of everything.

“It’s been a good day for us so let’s hope that it continues tomorrow.” 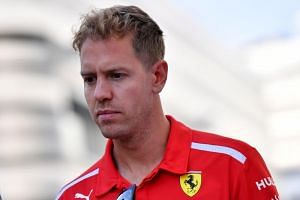 Formula One: Sebastian Vettel has nothing to fear but plenty to do in Russian Grand Prix

Vettel of Ferrari had been fastest earlier in the opening session, but was unable to deliver the same level of competitive pace in the afternoon.

The German had a spin during the session and seemed ill at ease with his team again. He said his day was “tricky” and had left him with much to do to close the gap.

‘FAR AWAY FROM REST’

“We look quite far away from the rest of the field so it’s not ideal,” he said.

“We are struggling a bit for one lap and also on the long runs.

“From just looking at ourselves it wasn’t a good day. I think we have some catching up to do.”

Bottas warned that he expected Ferrari to respond.

“It seemed like Ferrari weren’t really showing everything they have, so they will probably be stronger tomorrow. I think it’s going to be very close, so we’ll have to keep pushing,” he said.

Red Bull pair Max Verstappen and Daniel Ricciardo, who face engine penalties that will see them start from the back of the grid, were third and fourth, nearly half a second off the pace, but ahead of Vettel and his Ferrari team-mate Sauber-bound Kimi Raikkonen.

Sergio Perez was seventh for Force India ahead of Pierre Gasly of Toro Rosso and Esteban Ocon in the second Force India with Marcus Ericsson 10th for Sauber.

Ricciardo and Verstappen were penalised for exceeding the limit for engines changes during a session.

They were sanctioned after it emerged the team switched engines more than three times.

For Ricciardo it will be the fifth time in his past eight events that he has been hampered by mechanical issues.