SPA-FRANCORCHAMPS, Belgium (REUTERS) - Nico Rosberg seized pole position for Sunday's (Aug 28) Belgian Formula One Grand Prix with a lap that was only just fast enough to guarantee him top spot at the end of a close-run qualifying session.

The Mercedes driver lapped the 7km-long Spa-Francorchamps circuit in one minute 46.744 seconds but had a battle on his hands, with Red Bull's Max Verstappen in hot pursuit, just 0.149 seconds behind.

"It really wasn't so easy coming into qualifying," said Rosberg.

"We had a difficult weekend up to now, especially this morning. We were seriously off the pace on one lap.

"We got the job done in the end," Rosberg, who came seventh in the final practice session, told reporters.

Saturday's pole was the 28th of Rosberg's career. It was also his sixth of the season, third in a row and Mercedes' 48th in the last 51 races.

The German squad has started all but one race this year from the front.

Rosberg's path to pole was smoothed by a hefty 55-place engine-related grid penalty for team mate and title rival Lewis Hamilton. The Briton, who will start last, did only a handful of laps at an easy pace to qualify, not even bothering to set a time good enough to make it past the first phase. 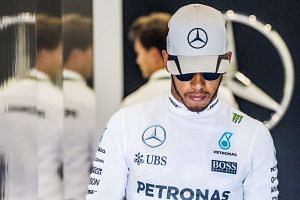 Formula One: Hamilton ready for slog from back of the field

The triple champion, who has won six of the last seven races to open up a 19-point advantage in the overall standings over Rosberg, has the odds stacked against him in his pursuit of a landmark 50th career win.

Verstappen's second place secures him the first front-row start of his career in a race that is the closest he has to a home event on the calendar.

At just 18 years of age, Verstappen, cheered on by legions of his orange-clad supporters, also becomes the youngest driver to start from the front row.

"I'm very pleased to be second here in front of my fans. It's a great motivation when you see them next to the track," said the Dutchman, who won on his Red Bull debut in Spain.

Sebastian Vettel, furious at having lost a significant chunk of time in the final chicane, was fourth for Ferrari. Daniel Ricciardo, in the second Red Bull, was sixth.

Fernando Alonso, already set to drop 35 places on the grid because of his own team's engine penalty, ran into more reliability trouble, his McLaren grinding to a halt before the Spaniard had managed to set a time.

His team mate, Jenson Button, was ninth, highlighting what could have been.