BARCELONA (AFP) - McLaren-Honda boss Zak Brown said he accepted Fernando Alonso's challenge to give him a race winning car for next year, and had no concerns at him leaving the circuit to play tennis after another engine failure.

The newly-installed American told reporters at the Spanish Grand Prix on Friday (May 12) that he had watched the previous day's news conference during which two-time champion Alonso, who is taking leave from the team to miss the Monaco Grand Prix later this month and instead race in the Indianapolis 500, issued his personal ultimatum.

"As he said, he would love to stay at McLaren. We've given him a great environment, he really enjoys it here - we've got to give him a winning car.

"Sitting here today in Barcelona, it's hard to know when that will be - other than we've designed lots of winning cars.

"We've seen other engine manufacturers make significant progress over the season, as you saw with Renault a couple of years ago, where they started and where they ended up.

"As he said, he's going to wait until after the summer break, which is what we've agreed."

Alonso said he would be open to offers for next year if by late summer he had not been convinced that McLaren-Honda could provide a winning car. 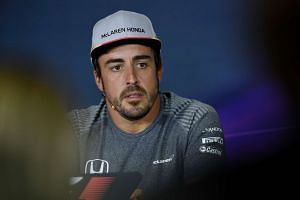 Formula One: Alonso tells McLaren: Speed up or I'm off

On Friday morning, in front of his home fans, he suffered another engine failure when he spun on his own oil leak before completing a lap in opening practice.

After returning to the pits, he left the circuit to go back to his hotel and play tennis.

Brown laughed off the incident.

"Well, his session was over," he said.

"I think you're not going to learn a lot by watching other cars go around so obviously he wanted to get rid of some energy, built-up energy, so I don't have any issue with that."