The Mercedes driver paid a moving tribute on Thursday to Aki Hintsa, the McLaren team doctor and fitness expert who played a key role in convincing the former champions to give him a Formula One debut in 2007.

"Whilst I have that fighting spirit in my heart from the last races I've done, I come here with almost double the power in the sense that I feel I want to win this race more so for him," the Briton told reporters. 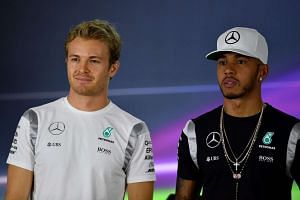 "We were texting every single race through his battle and particularly the last race on Sunday," he added.

"So coming here this weekend, whilst it's an emotional time, I'm here to try and do him proud."

Hamilton, 12 points behind team mate Nico Rosberg, revealed that he had flown to Switzerland immediately after winning the Brazilian Grand Prix to be with the Finn.

A former missionary and medic, who had worked in Ethiopia and African war zones before joining McLaren in the days when compatriot Mika Hakkinen was champion, Hintsa died of cancer last week at the age of 58.

"I was very, very fortunate to have been able to be there with him and his family in the last days and actually get to see him on the last day of his...," Hamilton said, his voice tailing off with emotion.

"On the Monday after Brazil, I got to see him and spend time with him and we played music, got to see him smile, got to see the amazing man he was," added the Briton, who flew back to Los Angeles before arriving in the Middle East.

"He was very instrumental in me getting that seat at McLaren... he'd built a really strong relationship with (former team boss) Ron (Dennis) and Ron was kind of a mind to say that if Aki says you're ready then I believe you're ready," he recalled.

Hamilton has won the last three races, and nine in total this season - more than any driver has ever managed in a season without taking the title.

With Rosberg sure to be crowned for the first time if he finishes on the podium, regardless of other results, Hamilton said his sole goal was to win the race.

"So 2016 has generally not been a spectacular year but there's been lots of positives to take out from it and either way I will take all the positives into next season."