MANAMA (REUTERS)– Ferrari were fined 50,000 euros (S$80,770) on Sunday (April 8) after one of their Formula One mechanics was hit by Kimi Raikkonen’s car and suffered a broken leg during a Bahrain Grand Prix pitstop.

Raikkonen, who had been in third place, was told to stop immediately and retired in the pitlane while team mate Sebastian Vettel went on to win.

Ferrari said the mechanic on the left rear wheel, named only as Francesco, had been taken to hospital with a suspected shin bone and fibula fracture.  He was knocked over as the Finn was wrongly given the signal to leave with only three tyres replaced and the other still to be removed.

“I go when the light is green. I don’t see what happens behind and unfortunately he got hurt,” said Raikkonen, the 2007 world champion.

“My job is to go when the light says so. Hopefully, he’s OK.”

The Finn was left sitting in his car for a while before stepping out while the mechanics focused on their stricken team mate on the floor.

Ferrari chairman Sergio Marchionne wished the mechanic a speedy recovery in his post-race statement.  “I am sorry for Kimi who could certainly have finished on the podium,” he added. 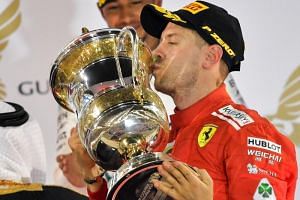 It was the second time Ferrari had been penalised for an unsafe release over the Bahrain Grand Prix weekend.

They were fined 5,000 euros after Raikkonen was sent out of the pits with a loose wheel in Friday's (April 6) practice.  Race stewards said that in Sunday’s incident the car was released “in a manner endangering team personnel and causing injury”.