SINGAPORE - The local racing community, as well as related sectors, reacted with disappointment but also understanding after news of the coronavirus-enforced cancellation of this year's Formula One Singapore Airlines Singapore Grand Prix broke on Friday (June 12).

Professional racer Yuey Tan, 38, who competed in the Porsche Carrera Cup at the Singapore Grand Prix from 2010 to 2019, was disappointed but said “racing is nothing more than entertainment”, and added: “I have two children and I love them very much. If this decision is going to keep people safer, I am really good with that, and I can’t wait for next year’s race.”

Hotels that line the Marina Bay Street Circuit are usually fully booked during F1 weekends while restaurants, clubs and pubs have also benefited.

Cinn Tan, chief sales and marketing officer, Pan Pacific Hotels Group, noted that while it was “disappointed with the cancellation”, she also called it “a prudent and sensible decision”.

“The Covid-19 situation is still uncertain, rendering the ability for international travels ambiguous,” she added.

The group enjoys occupancy in the “high 90s” during the F1 period as the hotels were also busy with corporate and convention events as well as enjoying brisk business in the food and beverage area.

She added that across its eight-strong portfolio, which includes the trackside Pan Pacific Singapore, the group “will see (a) loss of close to 3,000 room nights during the F1 week” but insisted that it “remains nimble and astute with a comprehensive recovery plan”.

Singapore Nightlife Business Association president Joseph Ong, 48, said the night race typically helps to bump revenues for night businesses by about 20 per cent, and that outlets at tourists hot spots Clarke Quay and 1-Altitude experience a spike of around 35 per cent.

He added: “It is a bit too early to say if it would have a big impact on our industry as we have not even gone into Phase 2 post circuit breaker.”

Absence of Singapore F1 this year a double whammy to economy, say analysts

'Very uncertain' whether restrictions on gatherings will be eased in time for F1 race: Lawrence Wong

However, he noted even if the race had been given the green light to proceed, health and safety protocols designed to stem the spread of Covid-19 would make social distancing hard to implement.

There had been some hope of the race proceeding after it was reported that Singapore Tourism Board (STB) had between February and April put up at least four tenders for the set-up of viewing facilities and ancillary activities.

But these were similar to past years’ practices and STB director of sports Ong Ling Lee said yesterday: “There were only two race-related tenders awarded this year. No compensation is required for the two tenderers, therefore there are no additional costs incurred by the Government.” 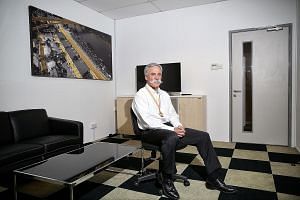 For fans who had already purchased tickets, race promoters Singapore GP will provide automatic refunds within 30 business days, or a rollover option to next year’s event. It added those who bought tickets through authorised ticketing partners should contact them for refunds.

This will be scant consolation though for F1 supporters who said they will miss the buzz from watching the drama unfold up close with a crowd, as well as the supporting events and activities that have made the Singapore Grand Prix a marquee event in world sport.

Red Bull fan Zaki Azmi, 25, who has been to six Singapore races, added: “The event (has) one of the most vibrant atmospheres in the world, but the health of the fans is more important than the race itself, so I feel this is the right decision.”

Thomas Wong, 35, is one fan who relishes the event’s heady mix of racing and star-studded concerts.

Said the Ferrari fan: “I’m not a regular race-goer, but the Singapore race usually brings in top international performers like Bon Jovi and Red Hot Chili Peppers, acts we don’t otherwise get to watch live. I hope the extravaganza will come back with a bang next year.”

Racing driver Tan is not worried that the cancellation will adversely affect the Republic’s standing in the motor sports community.

He said: “The Singapore race is quite different from the other Asian and European circuits. There is a different type of culture and format here. It is a street circuit and night race, which sets it apart from the rest.”