MONZA, Italy (AFP) - A crestfallen Nico Rosberg said he had no excuses for being nearly half a second slower than Mercedes team-mate Lewis Hamilton in qualifying for the Italian Grand Prix on Saturday (Sept 3).

The truth, he said, was that the defending three-time champion had his best qualifying session in a long time - and Rosberg could not match him.

"I think my best explanation is that he did some good laps," said Rosberg.

"I had a decent weekend so far and did some decent laps, but not quick enough.

"There were no problems. Nothing... The only problem was that he had his best qualifying in a long time. That is it."

Hamilton said that both of his laps in Q3 were near-perfect. 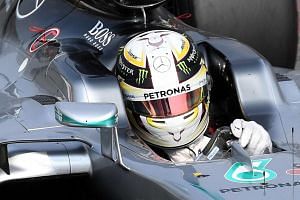 "Through qualifying, the lap was getting better and better. In Q2, the first lap was so-so and again, I didn't finish it off.

"But the last two laps were fantastic. The first one was great - the last lap was super clean.

"I didn't have any locks-up. I definitely did it the best I had done it all weekend.

"Parabolica is such an amazing corner and the grip that can carry speed through there is phenomenal."

Hamilton said that he had slightly flat-spotted a tyre in Q2, but said it would not affect him in the race.

Hamilton, who equalled the records of legendary drivers Juan Manuel Fangio and Ayrton Senna by registering his fifth Monza pole, leads Rosberg by nine points in the drivers' championship.