These are the Formula One drivers who would hardly dream of a podium finish, let alone a race victory. Usually starting from the back of the grid, they often have to endure the ignominy of being lapped by the race leaders on the track.

For the drivers who sit at the tail-end of the driver standings, it is all about being optimistic and taking baby steps as they look to move up the grid and go forward in their budding racing careers.

And one such example is Renault's Jolyon Palmer. The rookie driver said: "It's all about making the best out of what I can. I'm not struggling for motivation.

"If you want to make it in racing, you've to have a huge amount of determination. For me, there were many times when I felt I wasn't going to make it into F1.

"But you got to keep pushing, got to keep showing your best and opportunities will just arrive." 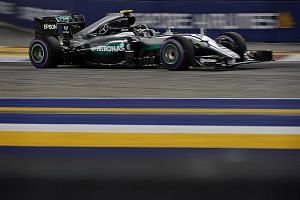 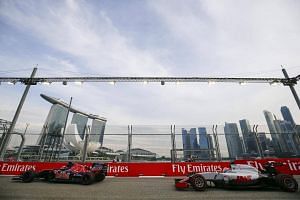 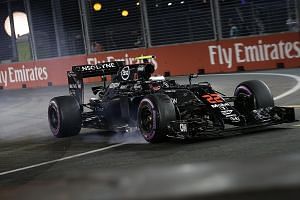 The 25-year-old was speaking exclusively to The Sunday Times in a car en route to the Paragon for a meet-and-greet session at Infiniti's F1 roadshow, where the new Infiniti Q30 sedan car was launched.

The Briton was a reserve driver last season with Lotus, and was handed a promotion to a full-time seat this season.

When Renault took over Lotus last December, however, they switched from a Mercedes engine to a Renault one late on, which puts the car "a year behind" in terms of development. "It's been difficult, I must admit, because we haven't really had the car to be fighting up the field," the son of former F1 driver Jonathan said.

"It's not easy but I've learnt a lot and I'm improving in every race. I put pressure on myself to move forward. My first goal was to drive an F1 car, then to race one - both I've done. Now, it's to get some points, a podium, win a race and the championship."

Before tonight's Singapore Airlines Singapore Grand Prix, Palmer is ranked 20th in the driver standings without any points on board.

He said: "Of course I want to be higher but it's just how it is. If you take a look at the driver standings, apart from the top, it's not very representative of the drivers' quality.

"You have to take it one by one, especially in my current situation where I'm struggling at the back with Renault. It takes a long time and each step is important."

Before F1, Palmer raced in the GP2 Series and was also an F2 driver but F1 has taken him to another level. He said: "The higher up you go, the more pressure and work it is. F1 requires a lot of thinking and if you miss a beat on the circuit, it's very difficult to make up ground but you enjoy it as well because you love what you do."

Ultimately, the aim for rookies and back-markers is longevity - being picked up by better teams and spending the best part of their racing careers at the elite level.

Said Palmer: "I hope I do last long in the sport. I want to still be here in 10 years' time because that means I've done a good job.

"I'd probably have had some podiums, won some races and maybe even a championship - I'll be doing something right."

A version of this article appeared in the print edition of The Sunday Times on September 18, 2016, with the headline 'Back-markers hope to make mark Briton motivated and aims to still be here in 10 years'. Subscribe
Topics:
More
Whatsapp Linkedin FB Messenger Telegram Reddit WeChat Pinterest Print Purchase Article Copy permalink