SUZUKA (Japan) • Valtteri Bottas believes he can still be a Formula One race winner this season, even if circumstances mean that he has to move over again to help Mercedes teammate Lewis Hamilton in the drivers' championship battle.

But the 29-year-old denied he was now resigned to playing a supporting role to Hamilton until the championship was decided.

"Definitely I am still allowed to win. But it will depend on the situation," Bottas said ahead of tomorrow's Japanese Grand Prix.

"It will really be case by case. The team told me that and that was also what I expected."

Bottas had been heading for a first win of the season in Sochi after starting from pole but was told to let Hamilton through because the Briton had a blistering tyre and was under pressure from Vettel.

"I just need to accept it now that I'm in this situation because of everything that has happened earlier in the season," added Bottas. 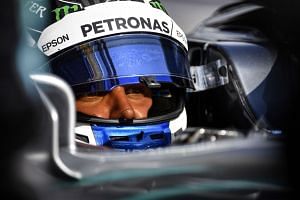 Formula One: Mercedes weighing up team orders after Bottas pole

Formula One: Valtteri Bottas puts Mercedes on pole in Russia

Hamilton 50pts up but Bottas deflated

"I cannot fight for the championship anymore, Lewis is. I'm a team player willing to help."

Hamilton has now won five of the last six races and could potentially wrap up the championship by the Mexican Grand Prix this month. He does not need to win again this season to secure his fifth title.

The 33-year-old has admitted he has mixed feelings about team orders but insisted that they would not take the shine off the championship if he were to win this season.

"Since the moment it happened until today, it is something I have thought about," he said.

"I don't think you get your mind around it. You just have to accept it and move forward. I'm definitely split (on team orders) just like 50 per cent of the people."

Several of his race wins have been utterly dominant at tracks where Mercedes had not been expected to do as well as Ferrari, such as Monza and Singapore.

That is why, Hamilton explained, he does not believe that the team orders in Russia will taint his title if he does go on to win.

"I feel like I've driven my hardest throughout the year," he said.

"I feel like I've conducted myself the right way throughout the year. This has been the best-performing year of my career."

A version of this article appeared in the print edition of The Straits Times on October 06, 2018, with the headline 'Bottas has licence to win on case-by-case basis'. Subscribe
Topics:
More
Whatsapp Linkedin FB Messenger Telegram Reddit WeChat Pinterest Print Copy permalink