BERLIN (REUTERS) - Germans started adjusting to a new world on Thursday (June 28), brushing off any notion that a shock humiliation in the World Cup, which coincides with a rare moment of political instability, was symptomatic of national decline.

German newspapers fused the fates of German team coach Joachim Low and Chancellor Angela Merkel who, after 12-1/2 years looking unassailable, is fighting for her political survival due to a row over migration with her Bavarian allies.

On top of Wednesday's defeat to South Korea which sent them out of the tournament in the opening round for the first time in 80 years, Germans are also aghast at turmoil in their proud auto industry over an emissions cheating scandal. That culminated earlier this month in the arrest of Audi boss Rupert Stadler.

Top-selling Bild highlighted the mounting problems last week after an ominous soccer loss to Mexico, with the headline: "The three pillars of Germany are cars, football, stability. Summer of 2018 will be remembered as a summer of shaky pillars."

Despite a media assault on the German team and headlines on Thursday such as "Summer depression" and "Make or break days for Merkel and Loew", Germans on the street took events on the chin.

"I didn't expect it, it was not foreseen at all that they would lose to South Korea. Germany will go on. I am optimistic," said truckdriver Michael Annamann, 44, from Magdeburg, adding at least there were plenty of jobs.

Girt Kirchner, 51, from Leipzig, said she was confident Germany would "find itself again" and it was important to look ahead confidently. 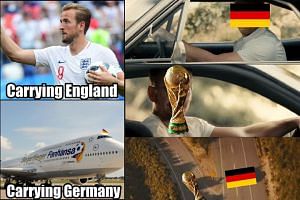 "I hope that (Germans) will reflect on this and become aware that they live an absolute luxury."

Even if fears of a trade war with the United States are clouding the outlook for Europe's biggest economy, ordinary Germans are still enjoying a long growth spell and record low unemployment. Economists see little chance of a World Cup hit.

"Unfortunately - or maybe fortunately - we have no experience of such an early exit from the World Cup," said Rolf Buerkl, an expert at the GfK market research group.

"But I do not expect a long term impact on consumer confidence," he said, adding it may hit beverage companies and bars briefly but overall consumption would not suffer.

Germans' resilient attitude to some extent reflects the spirit of the players, who picked themselves up and shouldered the blame.

"We are sorry that we didn't play like world champions. That is why we are deservedly out ... Defeat belongs to sport, as does recognising when others are better," wrote the team in a sober apology to fans.

Still, German media could not resist speculating about the decline and fall of Merkel and Low.

Focus online wrote that Low had much in common with Merkel, who has often had herself photographed with a successful German team, including when they won the World Cup four years ago.

"They've been in office for almost the same length of time, like eating Cordon bleu together. Now the chancellor and trainer are experiencing how fast things can go wrong," it wrote.