LONDON • Manchester United did not follow through with some of Jose Mourinho's transfer targets because of misgivings about the players he had identified.

Hence a decision was made from the top of the club that the 55-year-old Portuguese should not be allowed to get his way, if it meant potentially wasting tens of millions of pounds on short-term fixes.

As the transfer window closed on Thursday with no more arrivals at Old Trafford, new details have emerged that highlight the differences between the increasingly disaffected manager and the people above him, primarily the executive vice-chairman Ed Woodward, in terms of the players on Mourinho's wish list and whether they would have been worth the money.

To Mourinho's intense irritation, United's conclusion was that in most cases he had targeted defenders who were no better than those they already had and who, in today's inflated market, could conceivably have cost upwards of £70 million (S$122.4 million) without vastly improving the team.

Mourinho's enthusiasm for Harry Maguire was not shared by the Old Trafford decision-makers and, when the club approached Leicester, they were put off by the kind of fee that would have been necessary to sign the England international in the wake of Virgil van Dijk's £75 million transfer from Southampton to Liverpool last season.

The interest in Maguire was abandoned and, for all the speculation linking Toby Alderweireld with United, the truth is there has been only one conversation between Woodward and the Tottenham Hotspur chairman Daniel Levy throughout the summer.

That was Levy calling Woodward to ask about two of United's players, one being Anthony Martial. Woodward wants to keep Martial and that, again, is a serious issue between club and manager.

Mourinho was willing to cut Martial free and, behind the scenes, he has been withering in his assessment of the player.

The suspicion of United's hierarchy is that the manager is taking a short-term view rather than thinking more strategically about what would be better for the club in the coming years.

Alderweireld will turn 30 in March and, as well as a fee reputed to be more than £50 million, would have warranted a salary in the region of £25 million over the next four years. United decided the player was not worth such a huge outlay, particularly given his age.

Mourinho sees things differently and can argue that, without new signings, it is unrealistic to expect his team to overhaul Manchester City. He made that point in a press conference on Thursday by stating United's second-placed finish last season, 19 points behind City, was "one of my biggest achievements in the game".

Yet the club have had to balance the manager's wishes, and the permanent battle to keep him happy, by noting he is notorious for wanting short-term measures, rarely stays too long at any club and does not tend to worry about what happens when he leaves.

Their own vision of team-building is considerably different and that is why Woodward is against selling players such as Martial, Paul Pogba and Luke Shaw when they could conceivably be an asset to the club for many years.

United did have significant money available for summer signings and would have paid in excess of £100 million for Raphael Varane if the French World Cup winner had been available from Real Madrid. Woodward had breakfast with Real's president, Florentino Perez but nothing came of it. 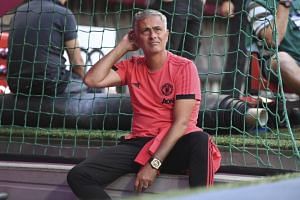 He was also willing to make an exception for Diego Godin of Atletico Madrid and inquired about the Uruguayan's £18 million release clause this week. The money was considered reasonable for a player of Godin's ability, but the 32-year-old was reluctant to leave Spain and another deal was scratched off the list.

Mourinho's desire to bring in another centre-back indicates he has misgivings about Chris Smalling, Phil Jones, Victor Lindelof and Eric Bailly, despite the latter two being his own signings.

The bigger problem for United is how the summer's transfer business affects the club's relationship with Mourinho when the only signings are Brazilian midfielder Fred, the injured Portuguese full-back Diogo Dalot and third-choice goalkeeper Lee Grant.

Former United midfielder Paul Scholes warned that Mourinho may leave United during the new season if the team are not doing well.

A version of this article appeared in the print edition of The Straits Times on August 11, 2018, with the headline 'Why United said no to Mourinho's wish list'. Subscribe
Topics:
More
Whatsapp Linkedin FB Messenger Telegram Reddit WeChat Pinterest Print Purchase Article Copy permalink