LONDON (REUTERS) - Arsenal manager Arsene Wenger praised his side's solidarity for getting them over the line on Saturday (Oct 15) as the Gunners held on with 10 men to beat Swansea City 3-2 in the Premier League.

"I have some mixed feelings because it looked at some points comfortable and then it never was. We could never capitalise on the two-goal cushion but at least we got the three points," Wenger said.

Arsenal had to see out the closing 20 minutes of the game at the Emirates with 10 men after Granit Xhaka received a straight red card - his eighth in two seasons - for bringing down Modou Barrow with a lunge from behind. 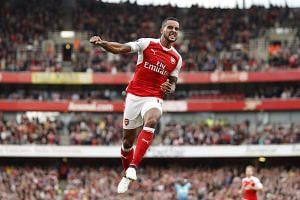 "I would say when we went two goals ahead we lost our focus and when you are playing a team who are down the bottom and trying to stay in the Premier League you can't do that," Wenger added.

"We finished with good solidarity and we made it over the line."

"Of course we are confident we can turn this around - after the week of training we have just had and the mentality of the team, for me we are going to become a good team," Bradley said.

"There is a lot there and the response of the players has been good.

"That game had many different parts. We started poorly. Defensively the first two goals were not handled well but we gave ourselves a real chance.

"At 3-1, the quality of football came up again. I am obviously a little disappointed, but I feel there were some positives that can be taken from the performance."