NANTES, France (AFP) - Nantes paid an emotional tribute to Emiliano Sala at the Stade de la Beaujoire on Wednesday (Jan 30) before their first match since their former striker's plane disappeared over the Channel last week.

The 28-year-old had been travelling from Nantes to his new club Cardiff City when the plane went missing, with pilot David Ibbotson the only other person on board.

British investigators said earlier on Wednesday it was "likely" that two seat cushions that have washed up on the French shore were from the missing aircraft.

Nantes unveiled a large photo of Sala in the centre-circle before kick-off in the Ligue 1 game against Saint-Etienne, while the Argentine's former teammates donned T-shirts with "we love you Emi" written on the back.

The tearful fans held a minute's applause and chanted his name.

All the Nantes players played in shirts featuring Sala's name instead of their own. 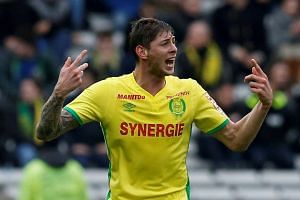 Former Nantes forward Yacine Bammou, who became a close friend of Sala's before leaving for Caen, was in tears in the stands, while coach Vahid Halilhodzic also struggled to contain his emotions.

Sala scored 42 league goals in 120 appearances for Nantes before signing for Cardiff in a €17 million (S$26 million) move.

He had visited his former teammates in Nantes on Jan 21 to say goodbye before flying towards Cardiff on the Piper PA-46 Malibu plane.

The official search was suspended last Thursday, but Britain's Air Accidents Investigation Branch (AAIB) said it would start an underwater search this weekend, working alongside a privately-funded search.

Hundreds of Nantes fans had held a vigil in the French city last week shortly after the first searches had failed to find the player.

"I did not have much hope. Now we must try to mourn and then move forward," said 69-year-old Nantes supporter Andree Guittet.