LONDON • England have the ability to compete with Croatia's recently crowned Fifa Player of the Year Luka Modric, insists Chelsea midfielder Ross Barkley, who also believes he can add a new dimension to the Three Lions on his international return.

He had to watch from afar as Real Madrid's Modric - who could win another major award after being nominated for the Ballon d'Or this week - and Barcelona's Ivan Rakitic outclassed England's midfield in a 2-1 World Cup semi-final win for Croatia in Moscow.

Three months on, the two sides meet again in the Nations League tomorrow (Saturday morning, Singapore time) and Barkley is just one of a host of young midfielders drafted into Gareth Southgate's squad looking to make an impact.

At 24 and with 22 caps under his belt, he is a senior figure compared to many of his new team-mates like Leicester City's James Maddison, 21, and teenagers Mason Mount - on loan at Derby from Chelsea - and Jadon Sancho of Borussia Dortmund.

"It'll be a challenge. You saw in the World Cup how great Modric was and Rakitic as well, who plays for a great side in Barcelona," he said at the prospect of taking on Croatia's midfield maestros.

"But we've got the players to compete with the big nations. We've got an identity now, we went to a World Cup and got to the semi-finals and we are going in the right direction."

Leicester midfielder Maddison is tipped as a missing creative link in Southgate's side despite being in the Premier League for only two months.

After a £22 million (S$40 million) close-season move from Championship club Norwich City, he has played all eight games in the top flight. And he is unlikely to be overawed.

His Premier League debut came at Old Trafford against Manchester United on the opening Friday of the season and he left observers purring at his classy display despite Leicester falling to a 2-1 loss.

Barkley also thinks Southgate's commitment to trusting youth and attempts to mould a more technically gifted side have changed England since his last appearance over two years ago. 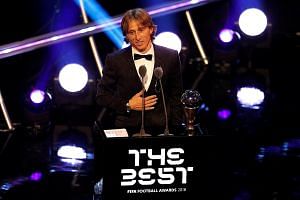 Football: Undervalued Modric finally getting his due

"We have gone in a different direction and I believe I can bring something different to the England team," he added.

Barkley earned his recall on the back of a strong start to the campaign with Chelsea after an injury-ravaged first season at Stamford Bridge.

"I kept a positive mind, worked really hard, and I'm over the moon to be back," he said.

Southgate, meanwhile, has instructed his players to watch footage of Barcelona's behind-closed-doors game with Las Palmas last year as he prepares England for the eerie atmosphere anticipated in Croatia.

Supporters will not be in attendance at the game at the Stadion HNK Rijeka, with European football governing body Uefa having punished Croatia after a swastika was marked on their pitch before the Euro 2016 qualifier against Italy in Split three years ago.

A version of this article appeared in the print edition of The Straits Times on October 11, 2018, with the headline 'We can match Modric: Barkley'. Subscribe
Topics:
More
Whatsapp Linkedin FB Messenger Telegram Reddit WeChat Pinterest Print Copy permalink