LONDON • Manchester City manager Pep Guardiola said his third Premier League title, secured on Tuesday after a lockdown-impacted campaign, was the toughest he had won so far.

City were crowned champions for the third time in four seasons after Manchester United crashed to a 2-1 home loss to Leicester.

Guardiola's side are 10 points clear of second-placed United (70) and have wrapped up the title with three games to spare.

They were denied the chance to celebrate last Sunday when Chelsea won 2-1 at the Etihad Stadium, while United kept them waiting with a 3-1 victory at Aston Villa.

But the delay was only temporary and City, who also won the League Cup last month, can finally savour a title triumph that is all the sweeter given the obstacles they have to overcome this term.

"This has been a season and a Premier League title like no other. This was the hardest one," Guardiola said.

"We will always remember this season for the way we won. I am so proud to be the manager here and of this group of players.

"They are so special. To come through this season, with all the restrictions and difficulties faced, and show the consistency we have is remarkable. It is relentless."

Treble-chasing City's seventh top-flight title could be the prelude to an even greater triumph on May 29 when they face Chelsea in their first-ever Champions League final.

Drained by the late finish to last season and ill-prepared due to the lack of a proper pre-season, City were slow out of the blocks.

After a dismal 1-1 draw against lowly West Bromwich Albion in December, City had won just five of their opening 12 Premier League games. 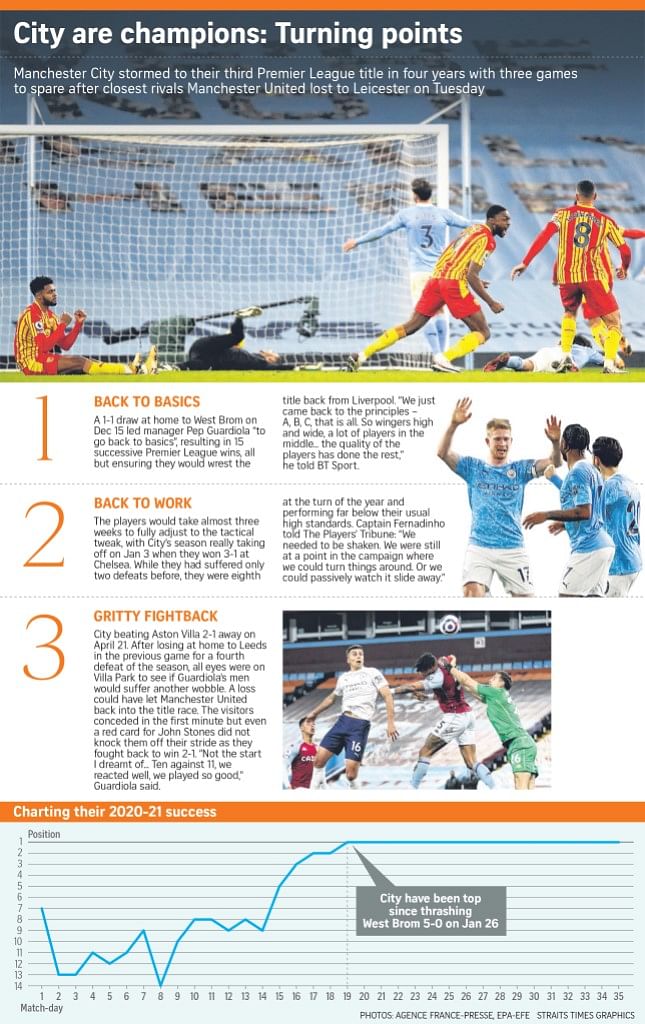 It was the worst start to a season of Guardiola's managerial career, and a coronavirus outbreak in the squad added to his problems.

But he masterminded such a superb recovery that City turned the title race into a procession, giving him three Premier League crowns to go with three La Liga trophies with Barcelona and three at Bayern Munich in the Bundesliga.

Following the West Brom game, City powered to 21 successive wins in all competitions, a record for an English top-flight club.

In another sign of their dominance, they will play their first match as champions at Newcastle tomorrow on a run of 19 consecutive away wins in all competitions.

One of the keys to City's success has been the inspired form of Ruben Dias, who has transformed Guardiola's defence since arriving from Benfica in August.

At the attacking front, City have been a potent force even without record scorer Sergio Aguero for long periods due to fitness issues.

The emergence of England playmaker Phil Foden as a match-winning force was crucial, with Kevin de Bruyne as consistent as ever despite battling injuries.

United and Chelsea - who are also in Saturday's FA Cup final against Leicester - appear poised for strong title challenges next term and Liverpool are likely to improve after an injury-hit campaign this season.

But, after the exits of club legends David Silva, Vincent Kompany and Yaya Toure in recent years, Guardiola has created a new generation capable of reigning supreme for years to come.

City fans will relish that prospect as they gathered outside the Etihad Stadium to celebrate the title triumph on Tuesday.

Fans are not allowed into games due to the coronavirus restrictions - a rule which will change next week, in time for around 10,000 City supporters to see the trophy presented at the home game against Everton on May 23.

But in the meantime, the City faithful took to the streets round the Etihad to celebrate, with flares and banners creating a colourful backdrop to the joyous chanting.

City joined the celebrations by unveiling a giant sky blue banner outside of the stadium once the final whistle blew in the United game.

It had the slogan: "CHAMPIONS" above a picture of the team celebrating.

Guardiola also paid tribute to the City fans for their backing in such a difficult period.

"It is so important to say a huge thank you to all our fans," said the Spaniard. "In our toughest moments, we couldn't hear the crowd get behind us as usual, but we know they are with us everywhere we go and that has lifted us.

"I hope we can all celebrate together one day not too far away."

A version of this article appeared in the print edition of The Straits Times on May 13, 2021, with the headline 'This title is hardest one: City's Guardiola'. Subscribe
Topics:
More
Whatsapp Linkedin FB Messenger Telegram Reddit WeChat Pinterest Print Copy permalink