You pick a club team, you chose its colours (available in home, away and third kits, in some cases). You wear the shirt, you kiss the badge. The jerseys are replica but your devotion is genuine.

Imagine the howls and hisses when one of your tribe attends a home game dressed in the colours of the opponents, the visitors, the enemy.

So, imagine the furore in cyberspace because some Singaporeans attended Thursday's World Cup qualifier against Japan wearing the kit of the Samurai Blue. 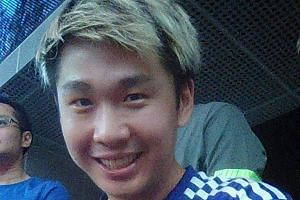 Poh Yi Feng, an S-League player with Balestier Khalsa who earned a national call-up in 2012, became a target for patriots who feel he committed the ultimate football treason by posting a selfie of himself at the National Stadium clad in a Japan shirt as the Lions lost 0-3.

Perhaps the Lions need to play better to win back the fans... Fans will be willing to stand behind the team if they could see lung-bursting runs, brave headers and heroic saves.

Faux pas or freedom of choice?

No laws have been broken but the fashion police sirens are wailing and Internet vigilantes have condemned Poh and several other local fans who had the Rising Sun instead of the five stars and crescent moon emblazoned on their chests.

In 2009, the Lions suffered the ignominy of marching out of the old National Stadium tunnel to the tune of You'll Never Walk Alone, the anthem of their friendly opponents that day - Liverpool.

Kallang was a sea of red that evening but most shirts had Gerrard and Torres printed on them instead of Alam Shah or Duric.

Some say it was a friendly, so it was all right. But patriotism is not something that comes with terms and conditions attached.

Five years prior, there was an outcry when some Singapore fans resold their tickets to Japanese fans, who numbered 4,500 in the 5,000-seater Jalan Besar Stadium then, which hosted the World Cup qualifier between the two countries.

Some local fans made a quick buck, flogging off their tickets, which had a face value of $18, for more than $200 on auction websites.

Such scenes can only demoralise the Singaporean footballers, who struggle against so many obstacles. The least fans can do is to support them, to wear red. So that both spectators and Lions can sense that they are part of the same team.

It is never nice to hold a Singapore passport but aid the opponent, overtly or on eBay.

Given Singapore football's struggles on the pitch, it does not need a rift among its fans now.

Perhaps the Lions need to play better to win back the fans. The capitulation to Japan will hardly impress.

Thursday's events might jolt the Lions but come Tuesday, they have a chance to impress the fans again when Syria come-a-visiting.

The loss to Japan was painful. But if those fans ditched their blue shirts for red at the next game, and if the national team bounce back with victory, perhaps Balestier player Poh would have helped Singapore football more than he could on the pitch.

A version of this article appeared in the print edition of The Straits Times on November 14, 2015, with the headline 'The Lions need a 12th man to roar'. Subscribe
Topics:
More
Whatsapp Linkedin FB Messenger Telegram Reddit WeChat Pinterest Print Purchase Article Copy permalink