MANILA - Singapore's hopes of progressing further in the Asean Football Federation (AFF) Suzuki Cup took a major blow after a 1-0 defeat to Group A leaders Thailand on Tuesday (Nov 22).

With that killer blow, the players in red all slumped to the ground, demoralised that their hard work had come to nought.

Singapore now need to beat Indonesia in their final Group A game on Friday to have any chance of reaching the semi-finals. The Lions started their campaign last Saturday with a 0-0 draw against co-hosts Philippines and have now failed to score in two consecutive games in this tournament.

"We almost got that important point to progress to the next game but that's football," Sundram lamented.

"But we still have a chance."

10-0-0 formation. 11 SIN players are in their field. Super bus of Asean. So boring. -- #AFFSuzukiCup pic.twitter.com/0spv9FJdbn 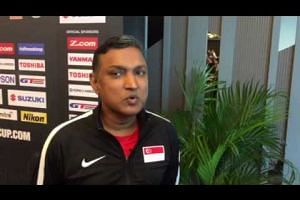 Thailand coach Kiatisuk Senamuang said: "It was not an easy game. Singapore played very well defensively, we had to work hard to get this result."

Although packing the rearguard with a 6-3-1 system when possession is lost, the Lions still crafted good chances. Right-back Juma'at Jantan was played through by striker Khairul Amri in the 63rd minute but he was unable to shoot on target.

With the match set for a draw, the Thais dragged the Singapore defence out of shape through the mazy runs of Chanathip Songkrasin, who fed Theerathon to curl a teasing cross into the box.

Three blue-shirted Thais attacked the ball and it was Sarawut who flicked the ball past goalkeeper Hassan Sunny for the winner.