While the other teams in Group A - the Philippines, Thailand and Indonesia - mixed freely as they dined in the hotel's ground-floor restaurant, V. Sundramoorthy's men ate privately in a room on the sixth floor as they sought privacy in devising their tactics to beat the hosts.

Members of the media were kept out from tactical sessions apart from warm-up drills, but already there are rumblings that Singapore will go ultra-defensive tonight.

How defensive? Six, yes, six defenders could be fielded against the Azkals in an attempt to force a draw.

Apart from centre-backs Baihakki Khaizan and Daniel Bennett, Shakir Hamzah and Hafiz Sujad will beef up the left flank as full-backs, while Madhu Mohana and Faritz Hameed will do the same on the right. 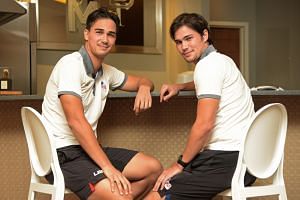 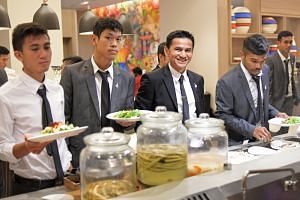 Thailand's Zico keen for Asean football to get better

That will mean Khairul Amri will play as a lone striker, as wingers are sacrificed in favour of an unusual 6-2-1-1 system.

At last night's training, Sundram went on a more offensive 4-4-1-1 system, but there is no telling what his final line-up or formation will be, as he could still make last-minute changes today.

He gave little away during his pre-tournament conference with the three other national coaches, Kiatisuk Senamuang (Thailand), Alfred Riedl (Indonesia) and Thomas Dooley (Philippines).

"We can press high or we can park the bus," he teased. "You will see tomorrow. Obviously, the Philippines are the favourites. It's good that we are the underdogs. But the game will be played on the pitch, so let's see how it goes."

Conference over, Kiatisuk, Riedl and Dooley stayed back to happily give more quotes to the media, but Sundram was quickly whisked away by Football Association of Singapore officials.

Results so far suggest that the Lions could struggle to contain the Azkals. In seven games in charge since his appointment in May, Sundram had tasted victory just twice.

Still, the team can rely on their vast experience to drag themselves to a result. They are filled with AFF Cup winners like Shahril Ishak (130 caps), Amri (110), Bennett (129), Mustafic Fahrudin (82), Baihakki (128) and Hassan Sunny (59) - stalwarts who are keen to reprise their past heroics.

There are also younger players like Hafiz and Faris Ramli, who are establishing themselves in the international scene. So there is no shortage of raw material.

Yet, Sundram prefers stealth - only submitting his final team list of 23 at the last possible moment. The tactician brought 26 players to Manila and axed Zulfahmi Arifin, Nazrul Nazari and Afiq Yunos only yesterday afternoon.

Amid all the uncertainties surrounding the Lions, it is probably appropriate that they are playing at the new Philippine Sports Stadium, located in the quiet town of Bocaue.

Barbed wire and armed guards ring the facility, as if national secrets or nuclear codes are at stake instead of sporting fun.

In Sundram's case, it is probably so, such is the confidential nature of his preparations.

A masterpiece in the works or a disaster waiting to happen? All will be revealed tonight.