The Football Association of Singapore (FAS) is standing firm on its decision for beleaguered Warriors FC to sit out the upcoming Singapore Premier League (SPL) season, reiterating in a statement yesterday that it remains fully committed to working with the club to help it "pull through this challenging period".

In its five-page media statement, the FAS said that Warriors' financial statements - the club recorded a net capital deficit of $1,158,249 at the end of 2018 - "underscore the severity of the club's financial problems" and that it was in the best interests of the club to sit out the 2020 season.

Last December, the sport's governing body had instructed the SPL's most-storied club to do so.

Warriors chairman Philip Lam swiftly rejected the directive, which he claimed had been made without consultation with the club.

However, the FAS said that it had been in contact with Warriors since last September to assess whether it was financially sustainable to participate in the SPL this year, and the club was "well aware" that it would not be able to comply with the FAS' club licensing requirements.

"In fact, in its various discussions with the FAS on how to resolve its financial problems, Warriors FC had itself mooted the idea of sitting out the 2020 season, although it subsequently changed its mind," said the FAS statement.

In response, Lam's spokesman said yesterday that an SPL sit-out would only "worsen the financial state of the club" as it would not be able to continue gaming operations and pay off its debts.

Thirty employees, both players and staff, would also be affected and agreed instalment plans with various agencies would be at risk of default, he added.

The club, whose team are record nine-time champions of the S-League, has been saddled with financial problems since 2018.

As of Dec 31 last year, FAS said it owed more than $800,000 to players, staff, the Central Provident Fund Board and Inland Revenue Authority of Singapore (Iras).

In October 2018, The Straits Times reported that Warriors had struggled to pay its staff on time, which led to the Ministry of Manpower suspending its work pass privileges, barring it from foreign hires. 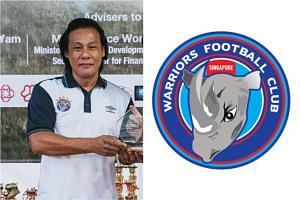 Football: Unsure of what lies ahead, Warriors players stay fighting fit in hope of SPL reprieve

Football: Singapore's most successful club side Warriors FC now plagued by struggles on and off the pitch

Last November, the club was charged with owing over $350,000 in salaries from as far back as July.

Last month, $150,000 was paid to players through loans from their management committee members.

The FAS said that it also did not make timely payments of requisite taxes for its gaming machines and goods and services tax to the Iras. It added that Warriors also owed money to other third-party creditors, including Borussia Dortmund for a licensing fee.

Noting that the club's management was "unable to rectify the long-standing financial problems" and that its financial position and governance had progressively worsened, the FAS issued a directive to Warriors to replace its general manager. However, it has refused to comply.

Warriors, who has signed deals with 15 players for the upcoming season, had also asked to participate in the SPL so that it could be eligible to receive the FAS subsidies and obtain a licence for operating its gaming machines, which FAS noted "had nothing to do with the football interests of the club".

"It was in these circumstances that the FAS decided that it was necessary and in the best interests of Warriors FC, including its players and staff, for the club to sit out of the 2020 season. This is not a decision taken lightly by the FAS," said the statement.

The association stressed that the sit-out would allow Warriors to "focus on rehabilitating, consolidating its resources and improving its financial position" in order to compete in the following season.

It had also been instructed to engage professional auditors to conduct a forensic audit of its accounts and financial transactions to determine the causes of its predicament and identify any systemic failures in its financial system or governance.

On Tuesday, Warriors wrote to the FAS requesting for a Jan 13 deadline to present a detailed plan for them to remain in the SPL.

This would include a financial plan and proposals for operations, debt servicing and revenue generation. It would also include the result of ongoing discussions with two foreign entities, City Academy and Australasian Soccer Academy, regarding a takeover.