Long regarded as the poor cousin of the Malaysian Super League, Singapore's own S-League could benefit from the LionsXII's split from football across the Causeway.

While disappointed with the manner of the exit perpetuated by the Football Association of Malaysia (FAM), the local football fraternity feels a possible influx of LionsXII talent into the S-League clubs will breathe new life into the competition that struggles to draw crowds.

Former Singapore international R. Sasikumar, who runs sports marketing firm Red Card, said: "Ultimately, for football to grow in any country, your own domestic league has to take shape. You cannot depend on foreign leagues to develop your own talent." 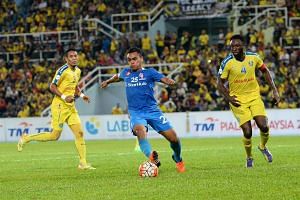 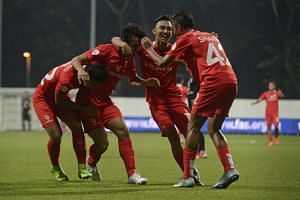 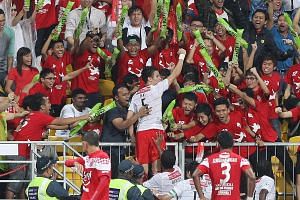 A four-year journey comes to an end

He added: "We should take this decision as an opportunity for a much-needed reboot of our domestic football scene."

FAM had announced on Tuesday that the LionsXII will no longer take part in Malaysian football competitions after having featured for four seasons.

LOCAL ROOTS A MUST

Ultimately, for football to grow in any country, your own domestic league has to take shape.
You cannot depend on foreign leagues to develop your own talent.

Tampines Rovers general manager Tay Peng Kee said, depending on their salary demands, "as much as possible, we'll take them in".

Geylang International general manager Andrew Ang added: "We already have some good talents in the S-League, but for the LionsXII players to be injected back, it will be a bonus."

It is understood that key LionsXII players earn upwards of $6,000 a month - almost double the average S-League salary of around $3,500.

If they are willing to accept a pay cut, it will lead to increased competition for first-team spots within the six local clubs.

"Our league can only be credible when the best players are in it," noted Warriors FC striker Fazrul Nawaz, a former LionsXII player.

Personally, he is not worried about the talent pool increasing because the "league will only get better as a result".

Our league can only be credible when the best players are in it.

These views were also shared by readers on The Straits Times' Facebook page.

"Or try to revive the sleague which provide jobs for 400+ professional players, coaches and staff? FAS the ball is in your court... Show us that you know what to do!"

Many football fans also question the success of the LionsXII project, given how there has been little knock-on effect on the struggling national team.

About half the national squad comprises LionsXII players.

For example, the 23-strong selection that lost the recent World Cup qualifiers at home against Japan and Syria featured 12 of Fandi Ahmad's men.

Nonetheless, the LionsXII regularly drew crowds of around 6,000 to the Jalan Besar Stadium.

Although this is still a far cry from the Malaysia Cup heyday when the old National Stadium could attract sell-out attendances of 55,000, most of the S-League clubs struggle for gates of more than 1,000 fans these days.

He said: "To me, it is indicative of a larger picture.

"As a footballing eco-system, there must be organisation and prior planning.

"We cannot wait till the day we get kicked out - we should be better organised so that we don't fall victim to things like this.

"Of course, having higher-profile players augurs well for the S-League but we cannot assume that, just because they come back, the league will completely change."

Should the LionsXII play in another foreign league or should the players return to the S-League?

A version of this article appeared in the print edition of The Straits Times on November 26, 2015, with the headline 'S-LEAGUE CLUBS MAY GET A BOOSTER SHOT'. Subscribe
Topics:
More
Whatsapp Linkedin FB Messenger Telegram Reddit WeChat Pinterest Print Purchase Article Copy permalink