PARIS • Paul Pogba's international team-mates give him the freedom to express himself and be the team's leader, the France midfielder said yesterday while seemingly making a dig at his Manchester United manager Jose Mourinho.

The 25-year-old, who has a frosty relationship with the Portuguese, has faced criticism for failing to repeat his impressive performances at the World Cup for United, who have struggled early in the Premier League season.

He was also stripped of the club's vice-captaincy last month.

France's glory in Russia now seems a long time ago after United's difficult start in the Premier League but reunited again with his France teammates, Pogba was happy to recall that defender Adil Rami had described him as the team's "real leader" at the World Cup.

"It really pleased me to hear Adil say that (but) I would never say it's me. It's the squad who put me in that position, who gave me the freedom to express myself. They gave me confidence as well," Pogba said.

"I couldn't have done it without them. It all began like that, from our training camp. I spoke with Hugo (Lloris), Blaise (Matuidi), (Raphael) Varane, to say that this World Cup we had to put everything in place to win it. I was really determined."

Pogba made his France debut in 2013, and has racked up 62 caps while appearing at three major tournaments. 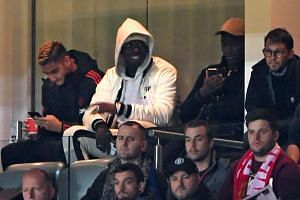 "At my age I'm between the two sets of players, the oldest and the youngest. That allows me to relay messages and have the chance to be heard," he added.

"I could say what I felt, give messages and pass them on from older players to the younger ones. I was the go-between you could say."

The subject of Pogba's reportedly fraught relationship with Mourinho was, however, strictly off the table for the interview at France's international training base.

The French face Iceland in a friendly match in Guingamp today (tomorrow morning, Singapore time) and resume their Nations League campaign with a return clash at home to Germany next Tuesday, following a 0-0 draw in Munich last month.

Despite taking on a key leadership role at the World Cup, Pogba insisted that the France captaincy was not one of his main goals.

"I've never played in the France team to be captain, being here is already a big thing for me," he said.

"You don't have to be captain in order to speak, a leader is not someone who has the armband. As a leader you can talk on the pitch but I've seen leaders who didn't necessarily talk."

Pogba was also one of six players in Didier Deschamps' squad to be nominated for the Ballon d'Or on Monday, and he believes the prize should go to one of his France team-mates.

"Whether it's (Antoine) Griezmann, Kylian (Mbappe) or Raphael, I can't pick one of them," he said. "But I sincerely hope it'll be one of those three, or even four because there's also NG (N'Golo Kante)."

A version of this article appeared in the print edition of The Straits Times on October 11, 2018, with the headline 'Pogba gets 'freedom' to lead France'. Subscribe
Topics:
More
Whatsapp Linkedin FB Messenger Telegram Reddit WeChat Pinterest Print Copy permalink