Over 600,000 expected to catch games, many of which will kick off before midnight

The People's Association (PA) is expecting more than 600,000 residents to throng community clubs (CCs) around Singapore for live screenings of World Cup football matches, after it announced yesterday that all 64 matches of the June 14 to July 15 Russia World Cup will be shown for free.

The PA started screening World Cup matches at CCs in 2010, and this is the first time all 64 games will be beamed live, although not every CC will show every game.

This year's initiative is in partnership with Singapore Pools, Singtel and StarHub.

Four years ago, when Brazil hosted the World Cup, the public screenings drew a total of 570,000 residents. The PA is expecting a bigger turnout this year as the kick-off times in Russia are friendlier for Singapore fans.

The earliest game is the Group C match between France and Australia, which will kick off at 6pm (Singapore time) on June 16.

The rest of the matches will kick off between midnight and 3am.

In 2014, play started only after midnight, Singapore time.

Ms Pearly Seah, the PA's director for youth and sports, said: "We are excited to be able to offer live screenings of the 2018 Fifa World Cup Russia to residents... Although the World Cup only happens once every four years, it unites people regardless of age and race as they cheer on their favourite teams." 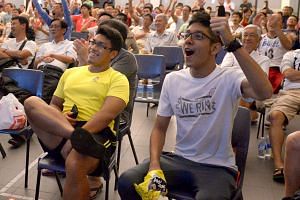 How to survive a month of World Cup madness 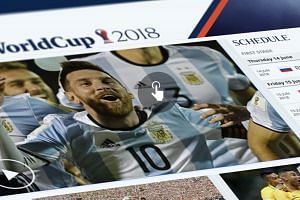 Most of the screenings will be held at the CCs' multi-purpose halls, auditoriums, theatrettes and sheltered outdoor facilities, and selected CCs will also make arrangements for food and beverages to be either sold or provided to residents.

The opening Group A match between hosts Russia and Saudi Arabia will be shown at 11pm on June 14 at Our Tampines Hub and 40 community clubs.

Details and broadcast schedules will be available online at www.pa.gov.sg and on the PAFrenz Facebook page during the week of the opening match.

These include sports table football (known as Subbuteo) at Pek Kio CC and a football try-out at The Serangoon CC.

Tampines resident Alex Lim, 46, told The Straits Times: "I am looking forward to the screenings at Our Tampines Hub. They often screen movies there and the area (of the screenings) is spacious and cool."

Mr Mohamed Abbas, a 30-year-old technician who lives in Jurong West, added: "At the last World Cup, I went to a few match screenings at the CC near my home and actually found the atmosphere to be quite enjoyable.

"So, I will definitely go down to catch a few matches when I can."

Three local companies - Singtel, StarHub and Mediacorp - are offering World Cup subscription packages priced at $112.35. Early bird subscriptions from April 25 to May 22 were priced at $94.16.

The rates are the same as those four years ago, the first time there is no price hike for World Cup subscription in Singapore.

In addition, football fans will be able to enjoy nine key matches on free-to-air television with Mediacorp, five more than in previous years.

These are the Russia-Saudi Arabia opening match, both semi-finals, the final, and five other group games.