LONDON • Manchester United manager Ole Gunnar Solskjaer has urged his players not to feel sorry for themselves following Tuesday's 3-1 League Cup semi-final, first-leg loss to Manchester City, and to look ahead to their next few matches.

Speaking at his press conference ahead of today's Premier League home game against Norwich, the Norwegian said: "You're disappointed when you lose a game against local rivals but do you feel sorry for yourself or knuckle down and get ready for the next one?

"One of the worst traits a footballer can have is feeling sorry for yourself. The boys have been focused, it has been a disappointing feeling, but I'm sure we'll get a reaction tomorrow."

United are fifth in the Premier League, five points behind fourth-placed Chelsea (36).

But, with a squad stretched to breaking point, they face a challenging spell of fixtures over the next few weeks, including an FA Cup third-round replay against Wolves before a match at Anfield against league leaders Liverpool.

Today's meeting with Daniel Farke's side would appear to give the Red Devils the ideal platform to rediscover their confidence after the dismal defeat against City.

United have won eight and drew one of their last 10 home league games against Norwich, although they did lose 2-1 the last time they met at Old Trafford in December 2015.

But their performances against the Premier League's lesser lights this season have been woeful, with defeats against Watford, Bournemouth and West Ham.

Solskjaer, with a lengthy injury list to contend with, insisted that he is focused on one match at a time. 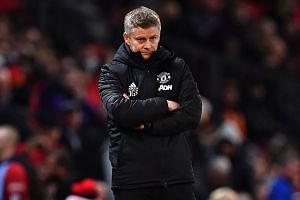 "It's against Norwich now, that's the focus," the 46-year-old added.

"We've got to go game to game, improve and get results in the league, Carabao Cup, FA Cup games, replay coming up as well... now we are just ready and focused to play Norwich."

The United boss also gave an update on defender Ashley Young, 34, who has reportedly rejected a one-year deal extension and agreed terms to join Inter Milan, either this month or in the summer when his contract expires.

"He's one of our players, our captain, there's loads of speculation, we've just got to handle it," Solskjaer said. "Ashley's been very professional. (The Inter interest) is a discussion me and Ash will have if it comes up, we haven't got too many players fit and ready so we need the ones we have."

One of the key players who is doubtful today is Harry Maguire, who has a hip injury. But Solskjaer said that the centreback "has got a chance" to play.

"(He'll) go through training today and we will see how he reacts," he said. "He's a warrior and if there's a minor problem he'll put himself up to play. He's got a chance now."

Fellow defenders Axel Tuanzebe, Eric Bailly and Marcos Rojo are not fully fit, while midfielders Paul Pogba and Scott McTominay are also on the sidelines. Forward Jesse Lingard is out with an illness.

A version of this article appeared in the print edition of The Straits Times on January 11, 2020, with the headline 'Ole: United will knuckle down '. Subscribe
Topics:
More
Whatsapp Linkedin FB Messenger Telegram Reddit WeChat Pinterest Print Purchase Article Copy permalink