RIO DE JANEIRO • Ridiculed all over the world for faking injuries and diving during a disappointing World Cup campaign in Russia, Brazilian forward Neymar has admitted to "exaggerated" reactions and said that he is still learning to deal with frustration.

In a 90-second video made for his sponsor Gillette and published on social media accounts and Brazilian television, the 26-year-old sought to win back fans who criticised his behaviour.

"You might think I exaggerate and sometimes I really do exaggerate. But the fact is that I suffer on the field.

The Paris Saint-Germain striker, who is not in the squad playing in the International Champions Cup in Singapore, had hoped the Russia World Cup would elevate him to a similar status enjoyed by thirty-somethings Lionel Messi and Cristiano Ronaldo.

These two players have shared the Fifa World Player of the Year award over the last decade. 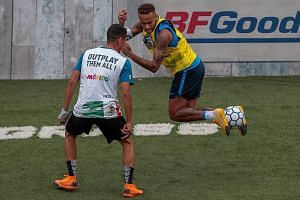 Neymar 'didn't want to see a ball' after Cup exit

Instead, Neymar bowed out in the quarter-finals when Brazil lost 2-1 to Belgium, as fans focused less on his football and more on the dives, rolls and tears he produced throughout the tournament.

The former Santos and Barcelona player, who suffered a serious foot injury in February and returned to action just days before the start of the World Cup, told fans in his homeland that he was working to become a better person and deal with the disappointments football threw at him.

"When I seem rude, it's not because I am a spoilt child, it's because I haven't learnt to deal with frustration," he said in a voice-over to the black-and-white video.

"But I am here, with a new face and an open heart. I fell down but only those that fell down can get up.

"You can keep throwing stones or throw those stones away and help me stand. When I stand on my own two feet, all of Brazil stands with me."

A version of this article appeared in the print edition of The Straits Times on July 31, 2018, with the headline 'Neymar admits at times he over-reacts to fouls'. Subscribe
Topics:
More
Whatsapp Linkedin FB Messenger Telegram Reddit WeChat Pinterest Print Copy permalink