With runaway leaders Manchester City comfortably on their way to clinching the title, the match at Old Trafford could decide who will be runners-up and with eight games remaining after the final whistle.

United are on 62 points, two ahead of Jurgen Klopp's Reds, thanks to their comeback 3-2 win over Crystal Palace last week.

"In my mentality, every match is the same and I'm not very good on that culture of 'this rivalry is special, that match is special'," Mourinho told a press conference yesterday.

"But I still don't look to some matches as special opponents. It's just a big match because we are speaking about two big clubs."

ANOTHER BIG GAME, THAT'S ALL

JOSE MOURINHO, Manchester United manager, on treating Liverpool like any other opponent.

SCORING ISN'T ALL THAT MATTERS

It's easy to sit at home and think Liverpool score like they want and United didn't score that often, but there are reasons why they have two points more than us.

The onus will be on Mourinho to take the game to the visitors but the Portuguese manager, often criticised for keeping his array of attackers firmly on the leash, is unlikely to risk throwing caution to the wind.

In the reverse fixture at Anfield in October, the United manager "parked the bus" in the 0-0 draw to frustrate Liverpool, a tactic he tends to use for big games.

Mourinho will again be faced with the enormous task of keeping Liverpool's Mohamed Salah quiet today.

The Reds had scored 20 goals in their previous seven games before a much-changed side drew 0-0 with Porto in midweek, a result that sealed a place in the Champions League quarter-finals for the first time in nine years.

With January signing Virgil van Dijk settling in well at the back and Loris Karius impressing in goal, the pieces are falling into place for Klopp's team, who have lost just once in 20 Premier League games.

But it is their forwards - led by the irrepressible Salah alongside Roberto Firmino and Sadio Mane - who have scored a combined 68 goals this season, that will give Mourinho a sleepless night. There was a palpable sensation around Anfield on Tuesday that Liverpool minds were already focused on United, with the free-scoring front three all rested at different spells of the game.

Klopp was full of praise at his press conference yesterday for Salah, who has scored 24 league goals and was named Player of the Month for February.

"It's deserved so all good. So far a good season but hopefully it continues," the German said. 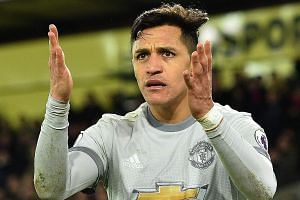 Football: Alexis Sanchez is an expensive enigma for Manchester United

On the match, Klopp added: "You have to bring the right things on the pitch. Counter-pressing is unbelievably important, quick decision-making, attitude.

"A lot of things. It's easy to sit at home and think Liverpool score like they want and United didn't score that often, but there are reasons why they have two points more than us.

"When United will attack I hope all my players are defending. If somebody says that is parking the bus, then no problem.

​"Over 90 minutes, we want to bring our (best) football on the pitch as well. That's the plan for this game.

"It'll be a big fight. Hopefully at the end with a positive result for us."

A version of this article appeared in the print edition of The Straits Times on March 10, 2018, with the headline 'Liverpool are not 'special opponents''. Subscribe
Topics:
More
Whatsapp Linkedin FB Messenger Telegram Reddit WeChat Pinterest Print Copy permalink