To almost every observer at the Etihad Stadium, the game was controlled by City but the United manager saw things differently.

Although his side's only shot on target was the penalty Anthony Martial converted in response to goals from David Silva and Sergio Aguero, he denied that the 3-1 scoreline reflected City's superiority.

"If the third goal is scored in one of the moments where they were dominating, I would probably say so, but it comes in a moment where we were in the fight to get the equaliser," the Portuguese insisted.

He was adamant that United had not given "a negative performance" and that the game "was open for 80-something minutes".

He also said previous matches at Bournemouth and Juventus had done his players no favours, unlike City, who had it comparatively easier with home games against Southampton and Shakhtar.

"We play two matches away, difficult where the second (one) was like a final against one of the best teams in Europe, where we give everything physically, mentally," added Mourinho, who also said that the absence of the injured Paul Pogba had hurt his side's chances. 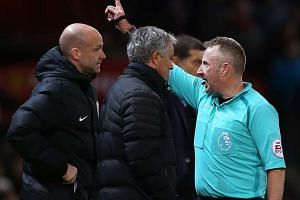 Football: Pogba has 'no regrets' about leaving Juve for Man United

"For different reasons, we missed Paul... we had to play (Marouane) Fellaini and he was not ready to play for 90 minutes. I can imagine when the result was 2-1, to bring on a fresh Fellaini, they would be in big, big trouble."

Yet it felt like Mourinho, whose side had only 34 per cent of possession and five shots to City's 16, was clutching at straws. It was the type of performance that has become a matter of routine and if anything, United got off rather lightly after City upped the tempo with four minutes remaining to put together a 44-pass move that ended with Ilkay Gundogan scoring their third.

With just under a third of the season gone and an average of three goals a game, City are threatening to eclipse the league records - 106 goals, 32 wins, 100 points - they set last season, although Pep Guardiola, ever the perfectionist, was not entirely satisfied.

"First half, not so good," the City manager said. "We played like, 'I don't want to lose the ball' but not (with) the intention to attack.

"Despite that, we were stable, the first 15 minutes was so good and after that, we didn't press so well. They (United) could play more than usual but the second half, we start from the beginning much, much better."

The Spaniard also touched on the showboating by City forward Raheem Sterling in the dying seconds.

His stepovers drew an angry reaction from United midfielder Juan Mata, and Guardiola confronted the England international at the final whistle over his behaviour.

"He made some movements with the legs, we can avoid it, but he's young and he's going to improve," the manager said.

THE GUARDIAN, THE TIMES, LONDON