Iqbal Hussain has earned himself a recall to the national team and he is keen to prove that it is no fluke.

The Hougang United striker scored against Home United in a 4-2 win two weeks ago, and he wants to find the net again tonight.

His team play defending champions DPMM in the S-League at Jalan Besar Stadium, and a win for Hougang will see them displace the Bruneian side in third. Hougang, on 28 points, are just a point behind DPMM and hold a game in hand over Steve Kean's men.

"It's a crucial game... Everyone's excited and I just want to help the team as much as I can," said Iqbal, who on Wednesday was named in Lions caretaker coach V. Sundramoorthy's squad for the friendly against Bahrain on Sept 1.

"I've been doing well in my last few matches for my club and I want that to continue."

With the Lions' first-choice striker Fazrul Nawaz (torn anterior cruciate ligament) sidelined for six to seven months, this is Iqbal chance's to nail down that attacker's slot in the national team. But the 23-year-old is staying grounded.

K. BALAGUMARAN, Hougang United coach, on having many players in the national team.

Iqbal, whose sole cap came two years ago in a friendly against Papua New Guinea, said: "Every striker out there will fight for that spot - not only me. There's Sahil (Suhaimi), Khairul Amri and also Safuwan (Baharudin). If I'm given the chance, I'll give my best in the upcoming international friendlies and do well enough to make the AFF Suzuki Cup squad."

His Lions recall has also left Hougang coach K. Balagumaran buoyant. Unlike many coaches who sometimes find themselves caught up in the club-versus-country tussle, Bala wants more of his charges to step up and stake a claim for a spot in the national team. 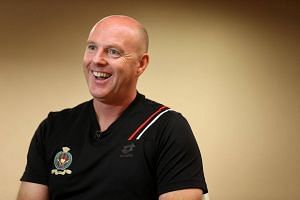 Kean: DPMM not thinking about being party poopers

He said: "There's a lot of potential in this team. Now, I've three players in the national team (Iqbal, M. Anumanthan and Nazrul Nazari). If I have six playing for Singapore by year-end, it's only positive for both club and country.

One reason for his confidence is that Bala is familiar with Sundram's style, and he is keen to mould players to meet the new Lions trainer's standards.

In the now-defunct LionsXII, Bala worked alongside Sundram as his assistant (2012-2013) and the following year, they continued their partnership at Negeri Sembilan. Bala served as the fitness coach while Sundram led the Malaysian outfit as the first-team coach.

"The key thing for him is that he wants players who are tactically disciplined," Bala said of Sundram.

"He's very particular about the team's organisation and defending. That's why we're working on those aspects with our players as well in training and matches.

"I trust the way he operates and will be more than happy to have my players under him."

A version of this article appeared in the print edition of The Straits Times on August 26, 2016, with the headline 'Iqbal has club and country in mind'. Subscribe
Topics:
More
Whatsapp Linkedin FB Messenger Telegram Reddit WeChat Pinterest Print Purchase Article Copy permalink